Politics nerds unite: If you like political commentary, this podcast is for you 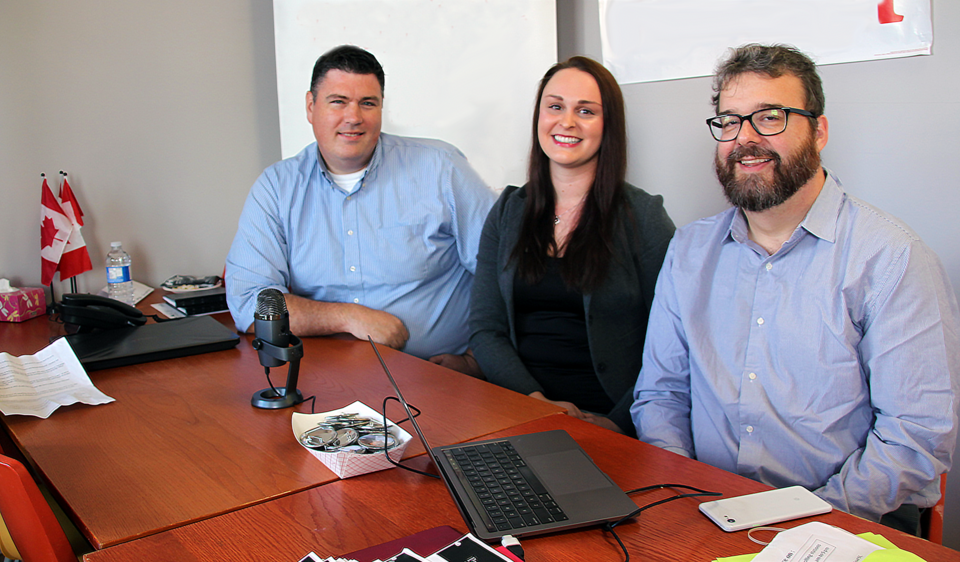 Richard Eberhardt, left, Rachel Adriaans and Jeff MacIntyre, along with Danielle Wicklander (not pictured) are the people behind Sudbury Politics – The Show podcast. (Supplied)

With the federal election in the books, and no more votes on the horizon for three years (minority government notwithstanding), what is a political nerd to do?

Fear not – a new podcast aims to satisfy people looking for political discussion that's a little more in depth, offering a look at what goes on behind the scenes.

Sudbury Politics – The Show features Danielle Wicklander and Richard Eberhardt, who have worked behind the scenes for the New Democrats, Rachel Adriaans, a Liberal who has worked for Paul Lefebvre, and Jeff MacIntyre of Fuel Media, who has worked for a Conservative, and in 2010 ran for politics himself in Ward 12.

In a recent interview with Adriaans, Wicklander and Eberhardt (MacIntyre was on the road), the trio said they all have non-political jobs now and were looking for ways to stay connected to politics.

“We're all finding ourselves in day jobs that don't allow us to do what we normally have done, which is being active in the front offices of campaigns or behind the scenes and campaigns ourselves,” Eberhardt said. “We're also noticing that Sudbury could use a little bit more political commentary out there — something a little bit higher brow than the average Facebook comment post.”

Wicklander and Adriaans met when they both worked at the city, and though one was a Liberal and the other NDP, both were passionate about politics.

“We were very similar – our political drive and political interests,” Wicklander said.

“The big thing was the municipal election,” Adriaans said. “We realized we were both political geeks.”

The three have worked in constituency offices and have seen how things work from the inside.

“Pretty much the only thing one of us hasn't done is get elected,” Wicklander said.

“I think the other focus of the podcast is to kind of bring light to the people like us, perhaps, who have worked behind the scenes and then kind of dig deeper into those issues and talk about how they matter and affect Sudburians.”

“And I think that we can sort of scratch beneath the surface a little bit,” Eberhardt said. “Because when we see a play that a campaign makes, we'll be able to compare that back to either our direct inside knowledge or our direct experience in making a similar decision or going down a separate path.

“What does that mean to the campaign? What's happening behind the scenes?”

Now that the election is over, the podcast aims to reach an audience that includes not only political nerds, but also people who are interested in how politics works at the ground level, away from the heated rhetoric.

“We're trying to both reach folks ... who are interested in what's going on behind the scenes,” Eberhardt said. “But we're also hoping that we can popularize to some extent some of the inner workings so that people are more familiar with it.”

“In explaining how some of these processes work, perhaps it'll have more of an appeal to the everyday person that's not as familiar with politics, but is maybe eager to learn a bit more,” Adriaans added.

When they interviewed the campaign managers, the goal was to shed light on how campaigns actually function — the day-to-day challenges of seeing an election through from the nomination to Election Day.

Adriaans said their focus is on the non-partisan aspects of politics, the stuff everyone in every party has to do to succeed, and the challenges in getting it done.

“We have different points of view, right, because we all came from sort of a different partisan background,” Wicklander said. “So we're able to sort of offer differing viewpoints on a particular issue and I think that's really valuable to the podcast. It's not just an NDP point of view or a Liberal or Conservative point of view.

“There may be disagreements ... but at the same time it offers a broader spectrum of opinions, because not everybody fits into a political box.”

So much of current political discourse focuses on the far ends of the political spectrum, Eberhardt said, whereas most people are closer to the centre.

“So the extreme views are heavily shared, whereas in doing the show, we can be critical of our own political backgrounds — wisely critical, because we've been there.”

The trio have some limits about what they can discuss: Wicklander works for the city, Adriaans for Health Sciences North and Eberhardt is director of communications and development at Green Economy Canada. So they are effectively “benched,” they say, from partisan politics.

“I'm an NDP supporter. Do I agree with everything on the platform? No. Am I willing to share those viewpoints? Yes, and am I going to get in trouble for it? No, because I'm not working for the party. So it offers us the ability to be a bit more flexible, I think.”

Adriaans said she misses political life, something she has been passionate about for a long time.

“So to be able to have these conversations with people from different political stripes and pick everyone's brains means a lot,” she said. “And we want to have fun too.”

“We all are relatively like-minded, but we do butt heads a little bit,” Wicklander said. “It's all in good fun and we're also very respectful of each other's opinions. And I think that's a big thing too – we all respect that we come from different ideas and have different opinions and whether they line up all the time or not, we appreciate each other's viewpoints.”

Wicklander and Adriaans also want to encourage more women to get involved in politics, and hope to use the podcast as a vehicle to explore the issue.

“Danielle and I are very passionate about getting more women into politics, and electing them,” Adriaans said. “So I know that's something that probably we will want to do a little segment on -- and we've talked about, you know, trying to rope in guests on the podcast to engage in that discussion.”