The four-laning of Highway 69 between Sudbury and Parry Sound took an 11-kilometre step forward Friday.
Sep 11, 2015 2:45 PM By: Darren MacDonald 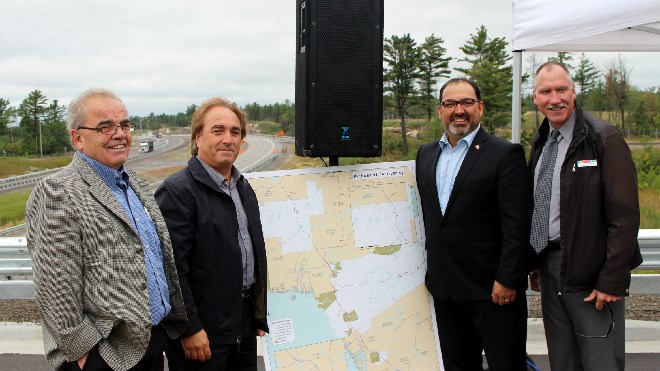 Sudbury MPP Glenn Thibeault, Deputy Mayor Al Sizer, John Kennedy of the Greater Sudbury Chamber of Commerce and John Cimino, project manager with the Ministry of Transportation, were all on hand Friday about 45 kilometres south of the city to officially open an nine-kilometre stretch of four-laned road between Sudbury and Parry Sound. Photo by Darren MacDonald.

The four-laning of Highway 69 between Sudbury and Parry Sound took an 11-kilometre step forward Friday.

Sudbury MPP Glenn Thibeault was about 45 kilometres south of the city to officially open an nine-kilometre stretch of four-laned road between Sudbury and Parry Sound.

"This truly is important for so many of us here," Thibeault said. "For those of us who have lived in Sudbury all our lives, we truly know the importance of completing this stretch of highway between Toronto and Sudbury."

Completing the four-laning project – which the province says will happen between 2019-2020 – is important for the safety of drivers and for economic development for Northern Ontario, he said.

"I know next spring there will be another announcement of another section opening up,”

Thibeault said. “And the good news is, (we will) see another contract going to tender this fall, which means we're going to continue to grow this highway and invest in infrastructure right across the province.

"It will change the perception of Sudbury and Northern Ontario for those in the south."

Deputy Mayor Al Sizer said finishing Highway 69 is key for the city's goal of diversifying our economy and growing an industrial tax base.

"New possibilities," Sizer said, when asked what the completed project means to the city.

"It's very, very difficult to maintain this city and our standards that people have grown accustomed to based on our residential tax base. We have to improve our industrial base and this will be a big step toward it."

John Kennedy, representing the Greater Sudbury Chamber of Commerce, said the chamber would like to see the road completed “sooner rather than later.

"Announcements like today make that light at the end of the tunnel seem a little brighter,” Kennedy said.

Thibeault said negotiations with three First Nations in the area – which the province said has slowed progress on the project – were now progressing.

"Negotiations are still ongoing,” he said. "But things are moving along, things are positive. We've heard things in the last few months that are happening with those First Nations, but there are also environmental assessments that need to happen."

When completed, Thibeault said Highway 69 will join the 400 series of highways.

"When that day happens, it will be a boon for us economically," he said. "When you're part of the 400 series of highways, it completely changes the perception of where we are in terms of southern Ontario."