Lessons to avoid bear encounters part of presentation
May 18, 2016 4:00 PM By: Jonathan Migneault 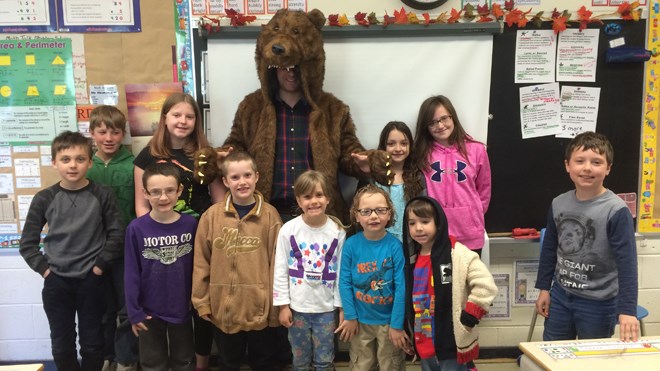 Commito, a research co-ordinator with the Northern Policy Institute, completed his PhD dissertation on the history of black bear management in Ontario, and has recently launched his own Bear Aware program to educate students with the Rainbow District School Board and the Sudbury Catholic District School Board about bear safety.

“I thought this year would be a good opportunity to try and tackle this more aggressively,” he said.

Last year had higher than normal human-bear encounters in and around Greater Sudbury due to a poor blueberry crop.

This year appears to be on track to match last year's numbers, at least so far. Between March 18 and May 17 of this year, police said they have received 48 bear-related calls.

Black bears have great memories, said Commito, and because they had to venture into populated areas last summer to find food, they could return to the same hot spots this year.

One the big lessons he teaches students in his presentations is to avoid attracting bears in the first place.

That means limiting the amount of time household garbage spends at the curb before pick-up, using bear-proof containers when possible, and properly cleaning the backyard barbecue after use.

Commito also tells the children – between junior kindergarten and Grade 3 – not to run away if they encounter a bear, but to back away slowly instead so they don't agitate the animal. Children should also inform a nearby adult if they see a black bear, Commito said.

Commito added his is always impressed by the knowledge the children display, and the great questions they ask after his presentations.

“Sometimes I think they have a better handle on this than some of the adults that we tend to encounter when we're talking about human-bear issues,” he said.

At the end of every presentation, during the question and answer period, he puts on a bear coat he received as a gift after he completed his doctorate.

The coat is always a big hit with the students, he said.

Commito said he has given his presentation to five local elementary schools so far, and has bookings for six more.