The Green Party of Ontario supports making First Nations “full partners” in the process of developing the Ring of Fire chromite deposit in northwestern Ontario, even though those leaders oppose building the facility’s chromite smelter in Sudbury.
Aug 8, 2012 5:14 PM By: Darren MacDonald 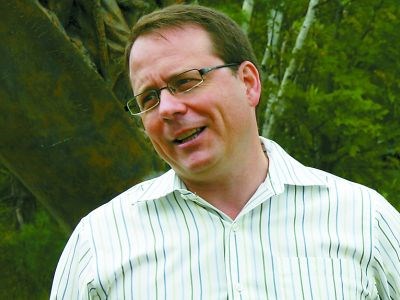 Green Party Leader Mike Schreiner talks to reporters beside the Miner’s Heritage Memorial at Bell Park on Aug. 8. Photo by Darren MacDonald.
The Green Party of Ontario supports making First Nations “full partners” in the process of developing the Ring of Fire chromite deposit in northwestern Ontario, even though those leaders oppose building the facility’s chromite smelter in Sudbury.

Speaking in front of the Miner’s Heritage Memorial at Bell Park on Aug. 8, party leader Mike Schreiner said he’s aware that First Nations chiefs in the area – about 500 kilometres northeast of Thunder Bay – have made building the billion-dollar smelter in their area their primary condition for supporting the development.

Since Ohio-based Cliffs Natural Resources announced in May that Capreol will be the site for its smelter, tribal chiefs in the Ring of Fire area have said they will start issuing eviction notices to the mining company as part of a campaign to force Cliffs to change its mind.

However, Schreiner insists the fault lies with the Liberal government for not ensuring that all Ontarians – and First Nations in particular – will benefit from the Ring of Fire.

“We have one chance to do this right,” Schreiner said. “It’s essential that First Nations have the full economic benefit of this resource.”

He pointed to the fact that Cliffs plans to build a massive diesel generator in the first stages of the development, when First Nations in the area want, for the first time, to be connected to the provincial power grid.

When told that area chiefs have been offered that option in exchange for dropping their opposition, and refused, Schreiner faulted the province for mishandling the process and failing to properly engage First Nations as full partners.

“It’s unacceptable that the Liberals are negotiating backroom deals on electricity pricing, and there is talk of building a 30-megawatt diesel plant,” he said. “We should be utilizing northern renewables such as hydro and building infrastructure that can also power First Nations.”

He also said the Liberals haven’t protected Ontarians’ interests in the process, pointing to the fact Cliffs plans to process as much as 40 per cent of ore from the Ring of Fire in Asia.

The Greens say the McGuinty government must address three areas before the Ring of Fire is developed: a plan to maximize benefits for northern Ontario while still protecting the environment and the health of Ontarians; getting First Nations on board by making them full partners in the process; and ensuring all “value-added processing is done in nsorthern communities.”

While her opposition was widely reported in the local media, Schreiner said her position was far more “nuanced” than it was portrayed.

In fact, he said, she was concerned about the economic viability of the smelter, and that the plant be built as environmentally responsibly as possible.

“We all need clean drinking water,” he said. “The environmental assessments need to take place ... so that the development proceeds in a responsible way. Pat Rogerson said that all these questions need to be addressed.”

He said an example of doing it right can be found in Finland, where an existing chromite smelter operates with proper environmental controls in place. However, smelters in Kazakhstan and South Africa have caused serious environmental damage.
“We need to get this right,” he said.

Schreiner is on a tour of northern Ontario, travelling in his hybrid vehicle from North Bay, all along Highway 11 to Thunder Bay and back down along Highway 17 to Sudbury. He’s handing out his business cards, which, of course, are printed on recycled paper using vegetable-based ink.