The summer's construction season is busier than usual this year, as the city received extra funding from the provincial government, but one mayoral candidate contends the work is about winning votes, not funding. In a press release issued Sept.
Sep 22, 2010 1:10 PM By: Bill Bradley 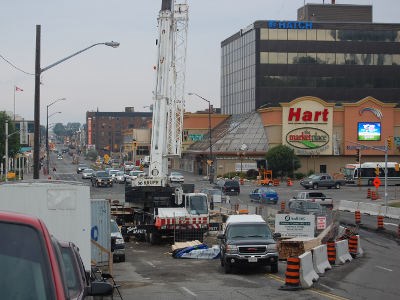 The summer's construction season is busier than usual this year, as the city received extra funding from the provincial government, but one mayoral candidate contends the work is about winning votes, not funding.

In a press release issued Sept. 21, mayoral candidate Marianne Matichuk said the current mayor, John Rodriguez, is using the taxpayer's money on the summer road construction in an effort to win votes — but is instead tying up city arteries and frustrating motorists and businesses.

“If the Mayor had better planning skills he would have spread the work out over time,” Matichuk said in the press release. “Instead, he has city staff digging up everything all at the same time.

“People are stuck in gridlock, being late for work, late for school, and late for children's activities — all because Mr. Rodriguez wants to create the illusion he is doing something.” She said business owners told her they were losing sales and have laid off employees because of the road delays.

But Greg Clausen, Greater Sudbury general manager of infrastructure services, said there are good reasons for why three major road projects are going on at the same time.

“We didn't have a choice,” Clausen said. “When someone comes along and offers you two-thirds funding for much-needed road projects and asks if you can do them, you say 'yes' and scramble to get it done.”

He said the city had a tight deadline to complete roadwork as part of the federal provincial infrastructure stimulus funding criteria.

“We applied for five roads 18 months ago and got three approved,” he said. “We also got the amphitheatre project approved. We had to complete all work by March 31, 2011. After that, the money dries up.”

He referred to the three road rehabilitation projects now underway — Falconbridge Highway from the Kingsway to the Skead Road turnoff, Lasalle Boulevard from Falconbridge Highway to Notre Dame Avenue and Paris Street from York Street to Kathleen Street. The budget for the work is $38 million.

Clausen said the city's short construction season meant all work had to be fast-tracked.

“As we were putting out tenders we were doing the design work,” Clausen noted. “We were maxed out.”

Clausen said that with the funding from senior levels of government the city's road work capital budget doubled in both years of the infrastructure program this year and last.

All major work on the three road projects will be complete by Thanksgiving, Clausen confirmed. The road projects involved an expanded “shave and pave” program, where, as roads were being repaired, sidewalks and curbs, sewer and water pipes were replaced if needed.

“This was a major rehabilitation effort,” he said. “We will have some minor work to do afterwards before the snow flies.”

Missing man Stephane Levesque located in good health
Dec 4, 2020 7:30 AM
Comments
We welcome your feedback and encourage you to share your thoughts. We ask that you be respectful of others and their points of view, refrain from personal attacks and stay on topic. To learn about our commenting policies and how we moderate, please read our Community Guidelines.