Living with Alzheimer's disease or other forms of dementia is a confusing, frustrating and difficult experience.
Jan 18, 2016 9:54 PM By: Jonathan Migneault 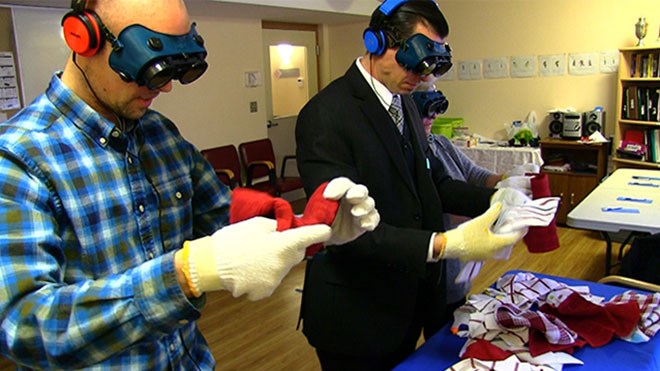 While it's impossible for someone without dementia to truly experience its effects, the Alzheimer’s Society Sudbury-Manitoulin North Bay and Districts hosted a simulation Monday that comes as close as possible to that experience.

Caregivers, students, police officers, volunteers and members of the media were invited to try the 12 Minutes in Alzheimer's Dementia experiment, and attempt to walk in an Alzheimer's patient's shoes.

To simulate dementia, participants walked with stones in their shoes, to give them a loss of balance and simulate arthritis.

They also wore gloves with rice in the fingertips, to limit their dexterity, wore dark goggles with Vaseline smeared on the lenses, which made it difficult to see, and wore headphones, which emitted jarring sounds and random pieces of music.

“A lot of people are really surprised at the distractions. I think the noises were very difficult for people,” said Jessica Bertuzzi-Gallo, the Alzheimer's Society's public relations and community development representative.

Once the participants were suited up, Bertuzzi-Gallo read them a list of four simple tasks they had to complete.

But due to the loud noises and music from the headphones, it was difficult just to make sense of her directions.

The first task was to write three short sentences on a pad for family members.

The blurred vision from the goggles, and limited dexterity, due to the gloves, made the task a challenge.

For the second task, participants were asked to fold a small pile of laundry. The walk to the station was painful and awkward, due to the stones in participants' shoes.

The third chore was to open a bottle of pills – which were actually Tic Tacs for the purpose of the simulation – and place them in a pill organizer. As with the first task, the limited vision and hand movements made it difficult to separate the different-coloured “pills”.

The final task was to make a table setting. While it was not as challenging as the other chores, the simulation still added another layer of difficulty to something that would normally be a simple daily task.

Bertuzzi-Gallo said the simulation was an eye-opening experience for many participants.

“This is what someone goes through 24 hours a day,” she said. “A lot of people don't understand Alzheimer's disease or dementia, so I think this is a great resource for people to come and learn what the disease is really about.”