Check out these ultra all-terrain vehicles that are sold in Coniston
Jan 16, 2018 4:01 PM By: Matt Durnan 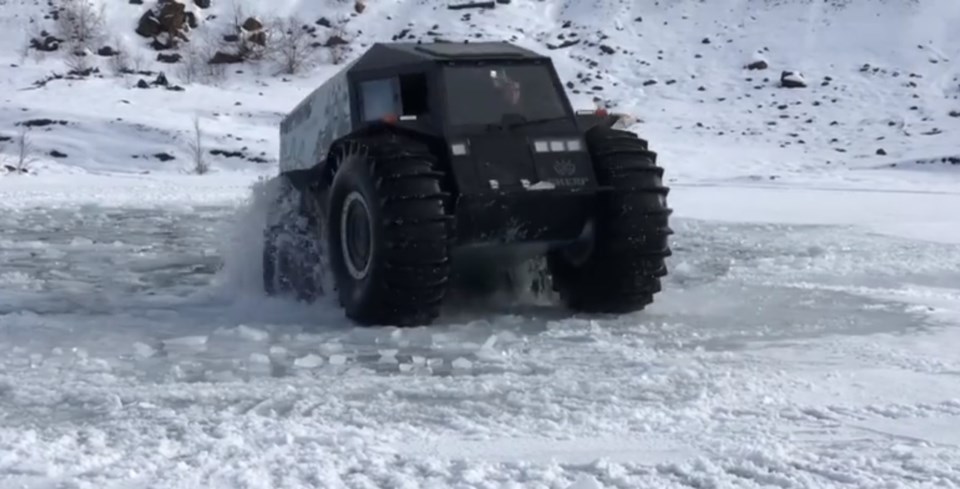 Looking for something to watch on tv this evening? Tune into Discovery Canada at 7 p.m. and check out a feature on Sudbury-based company, Coniston Industrial Park, Ontario's exclusive distributor of the Sherp.

Looking for something to watch on tv this evening? Tune into Discovery Canada at 7 p.m. and check out a feature on Sudbury-based company, Coniston Industrial Park, Ontario's exclusive distributor of the Sherp.

Daily Planet's Facebook page teased the segment with some behind the scenes footage where Daily Planet reporter Alan Nursall visits with Felix Lopes, owner of the Sudbury, business and takes a ride in the rugged, tank-like all-terrain vehicle.

Comprised of an aluminum body, the Ukraine-made Sherp is as tall as it is wide (eight feet), measures 11 feet long, and weighs in at 3,000 pounds. It’s been outfitted with a Kubota engine and a five-speed manual transmission, and can reach a top speed of 40 kilometres per hour.

Its diesel fuel tank has a 60-litre capacity, and the machine burns two to three litres per hour, and can comfortably travel 800 km on one fillup. But each of the wheel hubs additionally houses a 50-litre fuel reserve, extending the running time to 3,600 km on just one trip.

The entire segment for Daily Planet was shot in the Coniston area around a month ago, and Lopes was thankful that Mother Nature cooperated for the shoot.

"We cut out a section of ice to demonstrate what the Sherp can do," said Lopes. "Thankfully we didn't get hit with a deep freeze, that would've been a bit of a waste of time if the water just froze over again."

Coniston Industrial Park sells, rents and services the vehicles from its shop in Coniston, in addition to manufacturing the aluminum trailers to transport them.

Part of its versatility of the Sherp lies in the tires, which seemingly float atop the terrain. Tubeless, the tires’ pressure can be adjusted by inflating or deflating them according to conditions.

A chart mounted inside the ATV offers a guide as to pressure requirements for various topography. It can climb over obstacles as high as one metre and at a gradient of up to 35 degrees.

Lopes is hoping that the segment on Daily Planet reaches a wider audience of commercial applicators who are interested in the machines, though he has already had a good measure of interest both locally and beyond.

"We had a demo about a week ago with some guys from Vale who came out to check out the machine," said Lopes. "I haven't really had a lot of opportunity to test it out in the winter, but it's a four-season machine and I've yet to see any limitations, other than the fact that it doesn't fly."

During a demo session, Lopes had a visit from someone who discretely informed Felix that he was with "military intelligence".

"He didn't say too much more than that," said Lopes. "But he and the guys we had out from Vale were amazed with how the Sherp performed. I just put in an order for three more of them to be brought over from Ukraine."

The machines don't get to Sudbury directly from Europe, they're first delivered to Winnipeg where there is some assembly and inspection done, before they make their way to Coniston Industrial Park, fully-assembled and ready to roll.

"I really hope some commercial applicators see this segment and see what this equipment can do," said Lopes.

The episode of Daily Planet will air on Discovery Canada at 7 p.m. on Jan. 16.