Suzanne Shawbonquit to run for NDP in Sudbury byelection

She makes history as the first ever Anishinaabe person to run as a provincial candidate. Shawbonquit received more than 50 per cent of the vote from a large group of NDP party members that packed the United Steelworkers Hall on Brady Street.
0
Jan 11, 2015 9:25 PM By: Jonathan Migneault 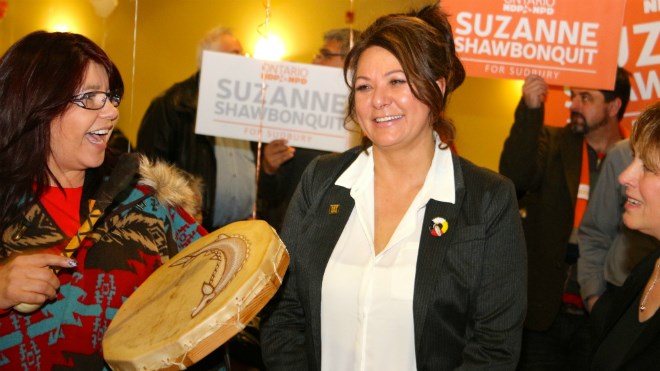 Suzanne Shawbonquit's supporters held a drum circle in her honour after she became the NDP's candidate for the Sudbury provincial byelection Sunday afternoon. Photo by Jonathan Migneault.
She makes history as the first ever Anishinaabe person to run as a provincial candidate.

Shawbonquit received more than 50 per cent of the vote from a large group of NDP party members that packed the United Steelworkers Hall on Brady Street.

She beat out Dave Battaino, the former executive director of Big Brothers Big Sisters Sudbury and John Caruso, a consultant and former mayoral and councillor candidate, for the nomination.

Nomination candidate Jesse Gaudet dropped out of the race early to throw his support behind Shawbonquit.

“Together let's paint Sudbury orange,” Shawbonquit told a jubilant crowd in a speech before the nomination ballot.

In her career Shawbonquit has served as the creative director of TEDxNickelCity, chaired the Ontario Trillium Foundation grant review team – from 2006 to 2012 – and has been a successful local business consultant and entrepreneur.

Shawbonquit sits on Cambrian College's board of governors, is a recipient for the Queen's Diamond Jubilee Medal for her contributions to Canada, and was nominated for a Northern Ontario Business Award.

She said tackling the youth unemployment crisis will be one of her main priorities if elected to Queen's Park.

Shawbonquit will run against Paula Peroni, who represents the Progessive Conservatives, Green Party candidate, and Laurentian University economist, David Robinson, independent candidate Andrew Olivier, and Glenn Thibeault, who defected from the federal NDP to run for the Liberals.

“The people of Sudbury have been hurt,” Shawbonquit said about Thibeault's defection and Liberal appointment, which forced Olivier to run as an independent. “They've been betrayed and I think it does need to be addressed at some point. They want answers.”

NDP leader Andrea Horwath was at the nomination meeting and did not spare any punches in Thibeault's direction.

“What Sudbury certainly doesn't need is an MPP hand picked by downtown Toronto Liberals,” Horwath said. “An MPP who will fall into line supporting Liberal policies that ignore the north and the people of Sudbury.”

While Horwath targeted Thibeault and the Liberals, she had strong praise for Olivier.

“Sudbury will never be bullied or bought. And I have to say good on Mr. Olivier for having the integrity that Kathleen Wynne lacks,” she said.