Teachers deciding 'next steps' this week

Now that the government has imposed contracts on many of the province's teachers, their unions are in the process of deciding what their next steps should be. Ontario Secondary School Teachers Federation (OSSTF) leaders are meeting in Toronto Jan.
Jan 7, 2013 8:33 PM By: Heidi Ulrichsen 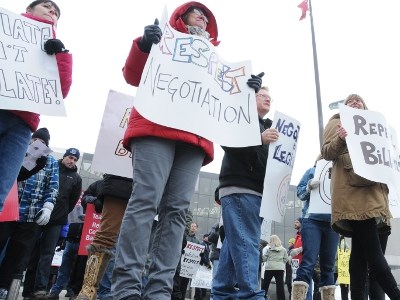 Elementary Teachers Federation of Ontario (ETFO) members took to the streets of Greater Sudbury Dec. 17 during a one-day walkout. ETFO and Ontario Secondary School Teachers Federation leadership will be meeting this week to discuss what they should do now that the province has imposed contracts on their members. File photo.
Now that the government has imposed contracts on many of the province's teachers, their unions are in the process of deciding what their next steps should be.

“Well, basically we're going to be discussing the imposition of the contract that was put on us by the government last Thursday, and deciding what to do from there, with regard to how to fight back against that contract imposition,” he said.

“We'll also be looking at ... what steps to take with political action we might be able to be involved with.”

Elementary Teachers Federation of Ontario (ETFO) Rainbow president Barb Blasutti said she didn't want to provide a statement at this time, but did say in an email she'll also be attending provincial union meetings Jan. 8-9.

Before students went off on Christmas break, both OSSTF and ETFO members had boycotted supervision of extracurricular activities, as well as some administrative duties.

ETFO members had also held a series of one-day rotating strikes in December. Both unions are also looking into holding a province-wide day of action, although no specific details have been announced.

There's even been speculation the unions could continue to boycott extracurriculars for the entire length of the two-year contract.

Rainbow District School Board trustee Robert Kirwan said at the board's Dec. 18 meeting that concerned parents have been phoning him about this.

“I am starting to hear from a number of parents of Grade 8 students who are very concerned about the possible lack of extracurricular activities in our high schools for the next two years,” he said at the meeting.

“They are telling me that they don't want their children to miss out on a very important part of the high school experience, and unless we can guarantee that the extracurricular activities will be provided as they have always been, then they may go to another school system.”

Clyke said he doesn't know exactly what the OSSTF will decide to do with regards to extracurriculars and other political actions, but said his members' “goodwill” is “at an all-time low” after contracts were imposed last week.

“So the expectation of extracurriculars returning would be limited,” he said.

Now that a contract is in place, any walkouts or withdrawals of non-voluntary services are illegal, Clyke said.

He said it may be possible for the unions to hold the provincewide day of action without a walkout, but adds that he's still unsure as to “how that's going to all shake down.”

ETFO provincial president Sam Hammond gives some hints about what may happen now that the province has imposed contracts in a statement on an ETFO website about contract negotiations, controlyourfuture.ca.

He said that given what has occurred, “it cannot be business as usual in public elementary schools.”

“Given the actions of the government, members will continue to focus only on the direct instruction of students and ensure student safety,” Hammond said.

“It has always been the position of the federation that participation in extracurricular and other non-instructional activities is voluntary. There are times when it is both appropriate and necessary to withdraw from voluntary activities. We believe that these are such times.

“For the time being ETFO members should continue to push the pause button on voluntary activities.”

He said the union's leaders will be meeting this week to “have a comprehensive discussion about next steps in responding to the government’s action.”

The union's lawyers are also reviewing the regulations used to impose the collective agreements, Hammond said.

He said the union also plans to approach the new premier and education minister after the upcoming Liberal leadership convention “and demand that they take action to restore immediately freely bargained collective agreements.”