Teachers' talks in holding pattern as contract set to expire

Then bargaining can start in earnest both provincially and locally. The bigger items, including whether or not teachers will receive wage increases, will be negotiated provincially.
Jul 26, 2014 6:04 PM By: Heidi Ulrichsen 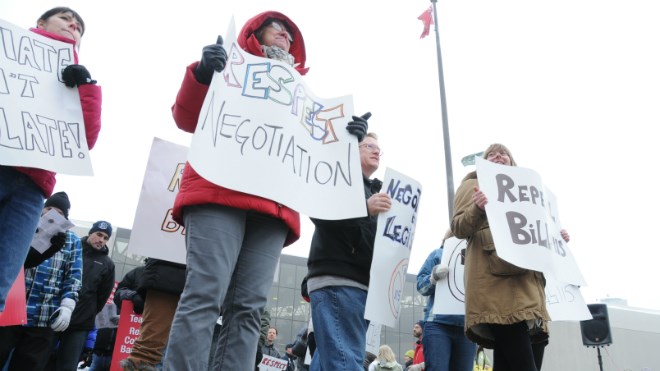 Elementary Teachers' Federation of Ontario members protested in downtown Sudbury in December 2012 when the province threatened to impose a contract on its members, something it did a month later. This contract is set to expire with the province next month. File photo.
Then bargaining can start in earnest both provincially and locally. The bigger items, including whether or not teachers will receive wage increases, will be negotiated provincially.

Ontario teachers' wages were frozen two years ago when a contract was imposed on them, leading to labour disruptions.

Education Minister Liz Sandals said last month wage increases for education workers is not out of the realm of possibility if savings could be found elsewhere, as there is no increase to the overall education budget.

Kent MacNeill, who leads the Sudbury elementary unit of the Ontario English Catholic Teachers' Association (OECTA), said it's pretty normal to let a contract expire before negotiating a new one.

But that doesn't mean he isn't anxious to start the process.

“We're chomping at the bit, waiting to go,” MacNeill said.
Even though it will likely take a few months to get to local bargaining, Rainbow District School Board vice-chair Dena Morrison said she's just happy trustees are being represented in provincial bargaining this time.

Trustees were largely excluded from the process two years ago.
“(The Ontario Public School Boards Association) represents us at the provincial table,” Morrison said. “That was something we supported as a board. So we're happy about that.”

Although the province's last round of negotiations with teachers led to strike action that impacted extracurricular activities, Morrison said she's confident the Liberals will do better this time.

Premier Kathleen Wynne — who took the province's reins about a year and a half ago, and recently won a majority government — seems committed to investing in education, she said.

Morrison points to the Rainbow board's budget, which received a $5.5-million boost to provincial funding this year, despite declining enrolment.

But with the government grappling with a $12.5-billion deficit, MacNeill said he's concerned the province may attempt to extract concessions from the teachers' unions, as they did two years ago.

Much to his chagrin, the 2012 contract meant Sudbury OECTA members lost their retiree benefits, a perk that had been negotiated locally.

“They can say 'We're still in a deficit,'” MacNeill said.
“It doesn't matter that they put us there or that their gas plants or all their other fine ideas got them into the place they are. They're going to come to us and look for concessions.

“I think certainly in Sudbury, the elementary members gave up enough. Last time it was taken, really, we didn't choose to give it up. But we're not going to be looking to give up anything else this time around.”

When Wynne became premier, she immediately reached out to teachers, and negotiated amendments to the contract imposed on them, said James Clyke.

“However, recently she's been talking about no new money for education and wage freezes for public sector workers and things, so that has me a bit concerned, I've got to say,” he said.