A “minimum” of several hundred good paying, professional jobs depend on the city moving ahead with a proposed Innovation and Technology park downtown, according to the managing director of the city's Downtown Village Development Corporation.
0
May 8, 2012 9:23 PM By: Darren MacDonald 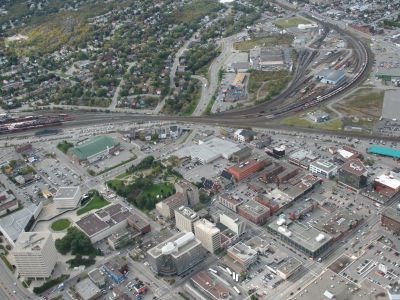 The city's downtown is the site for a proposed Innovation and Technology park that would result in several hundred good paying jobs, according to the Downtown Village Development Corporation. File photo.

A “minimum” of several hundred good paying, professional jobs depend on the city moving ahead with a proposed Innovation and Technology park downtown, according to the managing director of the city's Downtown Village Development Corporation.

Susan Thompson said development of the site has to be accelerated to accommodate the needs of companies interested in locating there.

“The time is now,” Thompson said. “The opportunity is at hand now. We see it. We see people looking for spaces in the downtown core. We're in a situation where the existing spaces can't accommodate the needs, but there is strong interest in being part of the urban setting.”

The Inno-Tech Park is part of the Greater Sudbury Downtown Master Plan. It would see the redevelopment of about five acres of land bordering Elm, Elgin and Lorne streets into a site for “creative businesses and industries in Greater Sudbury,” the DVDC said. At the centre would be a commons area, providing a park-like setting for the offices.

“It's an opportunity for city council to invest in something that's leveraging a tremendous amount of private-sector investment,” she said. “It's hard to say, to put a number on it, but at a very minimum, we're looking at several hundred professional jobs.

“These people will, in turn, be looking for places to live, they will be frequenting retail and commercial businesses. And not just in the downtown core, but across the city.”

Work on the Elgin Street Greenway, which will be adjacent to the innovation park, could begin this year, she said. The greenway will offer walking and cycling trails that will connect to downtown, Ramsey Lake, the TransCanada Trail and the Junction Creek Waterway System.

The two developments compliment each other, Thomson said, and together create an extremely attractive work environment capable of drawing top-tier young professionals to Greater Sudbury.

But with businesses looking to expand or move to Sudbury in the near future, timing is everything.

“They dictate the timelines,” Thomson said of the private sector. “If companies are growing and they need to add staff, they need developed spaces that will accommodate their needs.”

The surge in the number of companies interested in locating downtown is a direct result of a boom in the resources sector, she said. Added to the school of architecture that is being built downtown, Thompson says the area is approaching a “tipping point.

Ward 8 Coun. Fabio Belli, who sits on Board of Management for the Downtown Sudbury Business Improvement Area, said allowing Elm Street parking was the first step the city took to implement the Greater Sudbury Downtown Master Plan Moving forward with other elements of the plan, such as the Inno-Tech Park and the Elgin Street Greenway, will be more expensive, he said.

“One of the issues we're going to have is funding,” Belli said. “Where is it going to come from? It's great to have the private sector involved, but I think (city council) has to kick start the Downtown Master Plan with a big project.”

He said everything is still in the very early stages, and a pricetag hasn't been attached to developing either plan. But the expressions of interest from the private sector might be the push the projects need to get started.

“There hasn't really been a lot discussion on it just yet. But, I think you'll see something coming up in just a little while.”

“There are absolutely other places available downtown,” she said. “But the Inno-Tech Park is going to be suitable for those who can't find suitable spaces downtown, either because they require a larger footprint, or if they have other needs.

“There are other spaces that can be redeveloped, but in some cases, they can't provide enough space or the right setting.”

The concept needs to be further developed, defining such things as as what needs to be done and how much it will cost.

“I think the next step in the process is to move from concept to tangible plan,” she said. “Right now it's just a conceptual plan … But it needs to move forward, sooner rather than later.

“The private sector is there and ready to invest. We're really not at liberty to say (which companies have expressed interest) right now.

But companies tell us that if these sorts of things happen, it makes their job of recruitment easier. It's easier to attract people to come and work in an urban environment … Especially if they're surrounded by greenspace.”