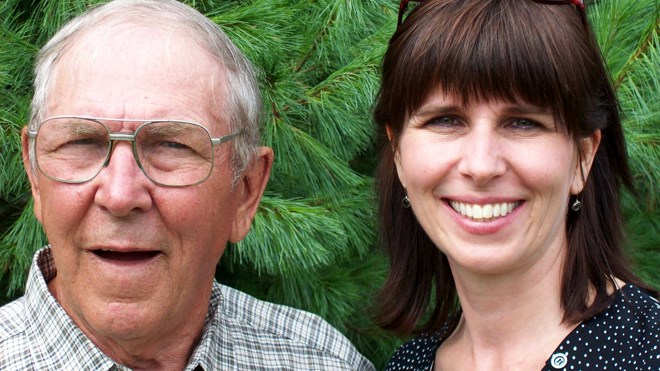 Janice Martell is undertaking an exhaustive research project to help get recognition and compensation for former miners like her father, Jim Hobbs, who were required to inhale McIntyre Powder during the course of their work as underground miners. File photo.

Janice Martell hadn’t even heard of McIntyre Powder until a few years ago.

Then someone suggested her father, Jim Hobbs — who had been diagnosed with Parkinson’s disease after three decades of working in nickel and uranium mines — could be eligible for compensation.

She began to research. And what she discovered was a revelation.

Between 1943 and 1979, underground miners working at operations in Canada and around the world were mandated to inhale fine aluminum dust — called McIntyre Powder by the mining executives who established the practice — at the start of every shift, and cough it up before heading home.

Facing high rates of health claims from miners, executives thought the powder would coat the lungs, working as a preventive measure against silicosis, a respiratory disease caused by breathing in fine silica particles.

Early medical research showed a possible link to neurotoxicity, and the practice was abandoned.

Jim Hobbs had been required to inhale the powder while working at the Quirke II uranium mine in Elliot Lake.

“I’m a miner’s daughter and I didn’t know that it happened until four years ago,” she said. “Our dads are stoic; they don’t talk about these things. They go in, they do their job, they come home, they feed their families. That’s what they did.”

A 2013 study out of Western Australia showed that, not only did McIntyre Powder not prevent silicosis, but those who had inhaled it actually had a higher potential for developing serious chronic illnesses, such as Alzheimer’s disease, stroke, and cardiovascular diseases.

The McIntyre Powder dissemination program was developed by mining executives with help from the Ontario Department of Health (now the Ministry of Health and Long-Term Care) and the Workers Compensation Board of Ontario (now the Workplace Safety and Insurance Board—WSIB). Yet attempts by workers to receive compensation have been spotty at best, said Martell.

Her own attempt to file a WSIB claim on her dad’s behalf was unsuccessful, but she wasn’t deterred. Instead, she started what she calls a “justice project,” documenting and cataloguing the names, stories and health details of miners who inhaled McIntyre Powder.

“It’s unbelievable to me that the people who made these decisions to initiate this are not being held responsible in any way to follow up,” Martell said.

“This was not an inherent working condition in the mines; this was something that was introduced by mining executives who were facing high compensation costs for silicosis claims.”

Travelling the North, Martell has, to date, compiled 131 names on a voluntary registry of miners, some of whom are deceased and have been added by relatives seeking answers. Some families have added generations of miners to the list.

The response has both surprised and uplifted her.

“I wasn’t quite sure what to expect when I started, other than I needed to try,” Martell said. “I felt like I needed to put it out there and, in my heart of hearts, I knew there were people out there that had the same concerns and that there were health issues.”

Recently, she has teamed up with Calvin Hinds at the Occupational Health Clinic for Ontario Workers to help with intake information, and Will Hamilton, an amateur historian who will continue documenting miners’ stories.

The health of her own father, who was diagnosed with Parkinson’s in 2001, is deteriorating rapidly, and Martell recognizes that the illness will one day claim his life. But she soldiers on.

“I just wasn’t content to let my dad die and not do something. I’m not OK with that,” said Martell, her voice breaking.

“He has a neurological degenerative disorder, and he’s not going to get better. He’s going to die from this, and I’m helpless to stop it. But I can do this at least, so that’s what I’m doing.”

Martell and her team, in conjunction with the United Steel Workers, are now planning an intake clinic to be held in Timmins in May. It will involve a more detailed and in-depth review of the health issues of miners who were exposed to the powder.

Martell’s aim is multi-faceted: she wants to raise awareness about the issue, create a critical mass of information that will form a foundation for further medical studies, and get compensation for miners.

But she also believes more resources should be available for in-home support.

Martell has taken a leave from her full-time job in social services to provide her family with home-care support, and she spends any spare time working on the McIntyre Powder Project.

That WSIB support isn’t available to these miners is incomprehensible, she contends, and she vows to continue her campaign for recognition.

“I think they would be wise not to underestimate my ability to fight.”

-McIntyre Powder got its name from McIntyre Mine in Schumacher where it was developed.
-The practice of inhaling aluminum powder as a preventive measure was adopted at mines in Canada, the U.S., Belgian Congo, Western Australia, and Mexico.
-McIntyre Powder was dispensed through a compressed air system in mine drys. Ventilation would be turned off while miners inhaled the powder en masse. The practice was made mandatory and conducted without medical supervision or the consent of the miners.
-It’s estimated tens of thousands of miners were exposed over the 36-year run of the program.