Christine Taillefer faced a lot of challenges in her short life. The woman, who lived with Down Syndrome, suffered from multiple health issues — everything from a congenital heart defect to dislocated hips.
Nov 4, 2013 3:01 PM By: Heidi Ulrichsen 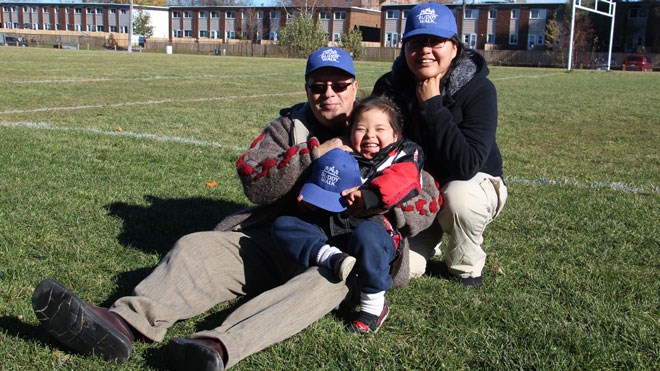 William and Robin Morin's five-year-old son, Wii'um, lives with Down Syndrome. The family participated in the Down Syndrome Association of Sudbury's annual Buddy Walk, which took place Nov. 3 at Lockerby Composite School. Photo by Heidi Ulrichsen.
Christine Taillefer faced a lot of challenges in her short life.

The woman, who lived with Down Syndrome, suffered from multiple health issues — everything from a congenital heart defect to dislocated hips. She passed away seven years ago, at the age of 30.

Her mother, Candace Taillefer, attends the Down Syndrome Association of Sudbury's annual Buddy Walk each year in her memory.

“I was blessed to have her that long, because she was only supposed to really see her first birthday,” she said. “She managed to make it to 30, and if I had to do it all over again I would.”

If there's one thing Taillefer wants people to know, it's that people with Down Syndrome are “just like anybody else.”

Taillefer was just one of about 400 people at this year's Buddy Walk, which was held Nov. 3 at Lockerby Composite School.

“Every year the Buddy Walk is growing and growing, so that really excites me to see that our community support is growing each year,” said Lisa Wright, the president of the Down Syndrome Association of Sudbury.

The purpose of the walk isn't to raise money, although the organization always ends up with generous donations after the event, she said. It's intended to raise awareness of Down Syndrome.

“There are a lot of people who have Down Syndrome in the community,” said Wright, whose 14-year-old daughter, Holly, has Down Syndrome.

“The statistics show that it's one in 800 births. So that quite a big population. The chances are you're going to go to school, work with, or have somebody in your community with Down Syndrome. So it's nice to get educated, to understand, and to accept and include them.”

Five-year-old Wii'um Morin, who lives with Down Syndrome, attended the Buddy Walk with a large group of family and friends.

He's a “spunky and cheerful and loving” little boy “who will hug anybody that smiles back at him,” said his father, William Morin.

Wii'um is also a great brother to his three siblings, and a wonderful role model to his classmates at St. Raphael Catholic Elementary School, said Morin. “We see so much of his little personality shining through,” he said.

Morin said he loves the fact that the annual Buddy Walk and the Down Syndrome Association of Sudbury bring families together.

He said he ran into an old friend at the walk, and she has an eight-month-old baby who was born with Down Syndrome.

“That's the important thing for those families with Down Syndrome that may have challenges, to know they're not alone,” Morin said.

For more information about the Down Syndrome Association of Sudbury, visit www.dsas.ca.