Tie one on to fight impaired driving 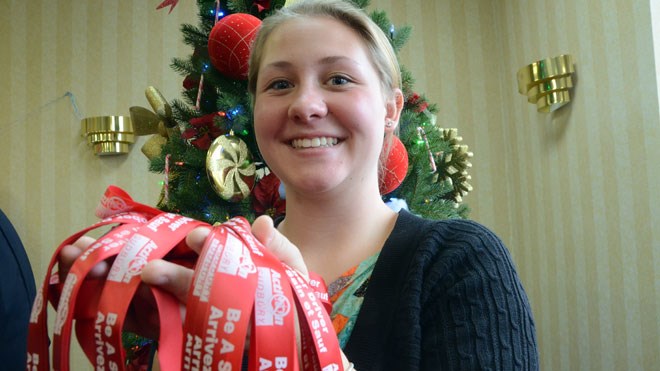 Confederation Secondary School Grade 12 student Emily Roeterink, a regional representative for OSAID and a youth director with Action Sudbury, shows off the red ribbons that people can tie onto their vehicle as a sign of their commitment to not drink and drive. Photo by Arron Pickard.
In 2014, impaired driving increased in Greater Sudbury by four per cent, said the city's top cop.

In December last year, during the month-long Festive RIDE program, officers stopped 7,680 vehicles. A total of 75 demands were made for roadside breathalyzer tests, with 10 people blowing in the warning range. Six people were charged with impaired.

“And that's just for the RIDE program,” said Greater Sudbury Police Chief Paul Pedersen on Friday during the launch of the 27th annual Red Ribbon Campaign, organized by Action Sudbury. “Unfortunately, the statistics are trending upwards.”

That's why partnerships like the one between Greater Sudbury Police and Action Sudbury are so important, he said. Through this effort, if they are able to make one person think twice about drinking and driving, then that's potentially one life saved.

Unfortunately, the drunk driver who killed DJ Hancock in August 2014, made the selfish decision to get behind the wheel while under the influence.

DJ's sister, Jaymie, was a guest speaker at the Red Ribbon campaign launch.

“All the terrible things I've learned and experienced (since DJ's death) came as the result of one person's choice to drive impaired, and it can happen to anyone.

“I'm constantly reminded of DJ, and every time I am, I'm also reminded of the way he was taken from us. I don't get to remember my brother without remembering the reason he isn't with us today, is due to someone else's choice.”

Jaymie said she received a letter in the mail recently from the Parole Board of Canada regarding the man who is responsible for DJ's death. The letter stated he was applying for unescorted leave. Her family has to write impact statements in order to keep him in jail.

“It's exhausting,” she said. “Every time we have to write an impact statement, we have to relive that night over, and we have to put our pain and tears onto paper.”

She said everyone gathered at the Red Ribbon campaign launch was there to take an oath to not drink and drive. To show that promise, people can tie a red ribbon onto their vehicle.

It serves as a symbol of their devotion to help eliminate the tragedies caused by impaired drivers in the Greater Sudbury and surrounding areas.

“The red ribbon represents safe and sober driving,” said Action Sudbury co-chair Ron Roy. “It also represents the lives of those who have died due to drunk driving. Together, we can eliminate impaired driving in Sudbury, and it all starts with a red ribbon.”

For more information about Action Sudbury and the Red Ribbon campaign, visit actionsudbury.org.