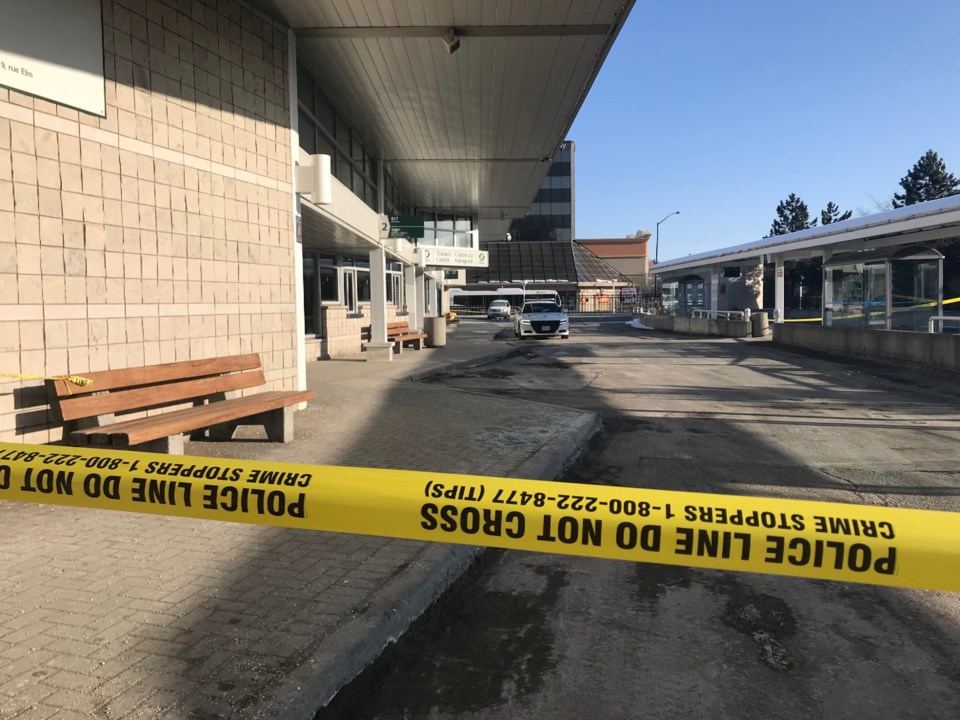 The man shot by police last April after a violent incident at the downtown Sudbury Transit Terminal was acting under marijuana-induced psychosis, his lawyer told a Sudbury judge Wednesday. (File)

The man shot by police last April after a violent incident at the downtown Sudbury Transit Terminal was acting under marijuana-induced psychosis, his lawyer told a Sudbury judge Wednesday.

Alex Stavropoulos, 25, was sentenced to time served (99 days in jail) plus two years probation for the April 1 incident, and was ordered to pay $215 in restitution to a Sudbury Transit employee. The worker was injured when police fired five or six shots to stop Stavropoulos, who came at them wielding a knife and ignored orders to stop.

The transit worker wants the $215 to replace the pants he was wearing when he was injured, and for new shoes, since the ones he wore got covered in blood.

Stavropoulos pled guilty to one charge of carrying a weapon (a knife) to commit an offence. His lawyer, Toronto-based Nicholas Xynnis, said he client was severely depressed at the time and the entire incident was an attempt at suicide – he hoped the cops would kill him.

Stavropoulos, who is from Toronto, was distraught over the death of this father, Xynnis said, and had been drinking in addition to consuming marijuana.

He had two knives when he arrived at the transit terminal, and tried to enter the security office. Police were called and they ordered him to drop his weapon.

Stavropoulos was tased twice and shot in the leg when he was finally taken down, and began yelling “white power,” court was told.

With his sister and mother looking on, Xynnis said his client is now on anti-psychotic medication and spent a month in hospital recovering from his injuries.

He could have had the charges dealt with last month, but opted to wait until he could arrange to move into an apartment with the help of the Canadian Mental Health Association. Stavropoulos has no previous record and has apologized to those affected, including the transit worker that was injured.

Stavropoulos was sentenced to time served, plus two years probation, a 10-year weapons ban, he has to give an DNA sample and pay a $200 victim surcharge.

He declined to address the court and was released after the sentence was handed down.