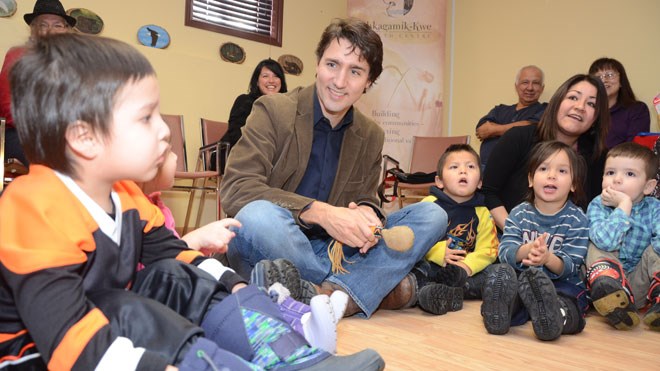 “Thank you for this extraordinary place the community has built,” Trudeau told staff and clients of the unique facility, one of 10 in Ontario, the only province which such centres. “As we look at the rising challenges of health-care costs that are being felt across the country, we need to look at different solutions.”

A combination of modern health care and traditional medicine, board chair Hans Mathews said the centre caters to Aboriginals who live in cities, and it's time to expand it to First Nations communities.

And Angela Recollet, executive director of the clinic, said the family atmosphere and respect for First Nations traditions are a model for future partnerships with the federal government. It's a ground-breaking model that has proven to be successful, Recollet said.

“I joked with Justin when he came in, I said 'You're a big deal because there's a whole bunch of people here … but we're a big deal here, too,” she said.
“Her quote was, 'You're something, but we're the shit,' ” Trudeau said, as the room broke out in laughter.

The popular Liberal leader, who is leading in the polls despite having just 36 MPs, demonstrated his political skills a few times Tuesday. He handled a conspiracy-theory question from the audience with ease, and when one of the children about to sing him a song in Ojibwa burst into tears, he quipped, “I know how you feel.”

Then pointing to the media, he said, “You guys make me feel that way sometimes, too.”

The mood turned more serious when Recollet presented Trudeau with a blanket with a design by renowned Wikwemikong artist Leland Bell. After describing the importance of the symbols on the blanket, she said it also was an attempt to recognize – and reverse – a dark part of history. European settlers intentionally gave smallpox-infested blankets to Aboriginals, a disease that killed millions and wiped out many communities across North and South America.

“As you know, many moons ago, the blankets were traded with us and carried disease,” Recollet said. “I wanted the reclamation … where we're creating a health community for our future generations. So we would like to give you this on behalf of the board.”

When asked during a media scrum afterward, Trudeau said the centre is a rare bright spot in a nation “desperate for success” when it comes to its relationship with Aboriginals.

“We have to look at First Nations issues as an opportunity for this country, not just a challenge or something to be fixed or solved,” he said, adding he was a strong supporter of the Kelowna Accord supported by former Liberal Prime Minister Paul Martin, but rejected by Prime Minister Stephen Harper.

“I truly feel there's an opportunity here to work together,” he said. “Not just on what was achieved, but how it was achieved, with real money and real objectives.”

He also supported a role for the federal government in getting the Ring of Fire back on track, saying he's open to providing financial support.

“The Ring of Fire represents tremendous resources, not just for Ontario, but for the entire country (and) we need to have a federal role,” he told reporters. “There are a number of ways to do it, whether it's matching funds or loan guarantees.

“But I definitely believe the federal government needs to be part of the infrastructure projects that will unlock this great potential.”

He bristled at suggestions he doesn't offer specific policies, but general statements and platitudes.

“I never know what I'm going to be accused of – which is it? Do I make gaffes or do I speak in platitudes?” Trudeau asked. “I've actually taken many very, very strong policy positions from the very beginning.”

He's in favour of the Keystone XL pipeline, for example, as long as it's built in an environmentally responsible way.

“My positions on any number of issues, from Quebec to legalization of marijuana, I've taken some very strong positions, and I will continue to,” he said. “But one thing I will continue to do is leave room for Canadians in developing the solutions that we need to have heading into 2015.

“Many political parties do too much in the backroom deciding what the country needs and then try to sell it.”

However, as the next federal election approaches, Trudeau said he'll present more detailed policies after he consults with voters across the country.

“Absolutely,” he said. “I've committed many times that we will have a detailed platform in 2015.”

He's attending a fundraiser tonight in Sudbury, and will be at College Boreal and Gloria's Restaurant on Friday. When asked about his poor attendance record in the House, Trudeau said he's spending time in ridings rebuilding the party and trying to counter Tory attacks.

“The Liberals lost an awful lot of seats in the last election -- we're down to 36 seats in the House of Commons,” he said. “We have a lot of work to do to regain people's trust.

“I'm trying to reach as many people as possible and being able to go up against a very, very determined, ruthless negative machine that the Conservatives have built with an awful lot of money.”