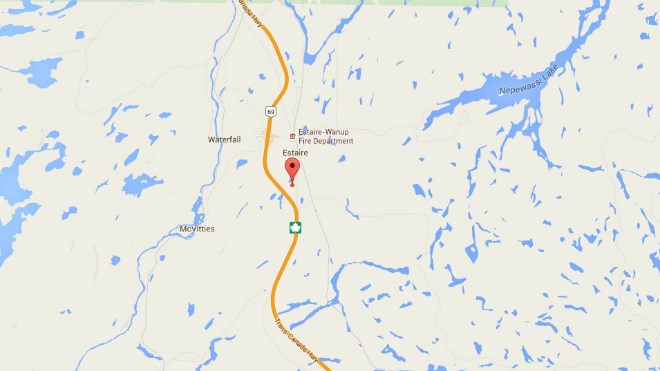 According to the Ministry of Natural Resources,two earthquakes originated at the coordinates 46.3 N, 80.8 W, which is just roughly 40 km south of Sudbury, close to Estaire. Photo: Google Maps.
Update: Jan. 10 6:45 p.m.

The Ministry of Natural Resources has reported that two earthquakes occurred this evening about 30 km southeast of Sudbury.

According to the MNR, the quakes originated at the coordinates 46.3 N, 80.8 W, which is roughly 30 km southeast of Sudbury, close to Estaire.

"There are no reports of damage, and none would be expected," said Alison Bird of the MNR in an email to NorthernLife.ca

Reports are circulating social media of two significant that shook the ground in the Greater Sudbury area around 5:50 p.m.

The reports have come from Lively, Azilda, Dowling, Chelmsford, Hanmer, Val Caron and parts of Sudbury.

One caller to the NorthernLife.ca tip line reported "two big blasts" heard and felt in Chelmsford.

"They sounded like they came from the north of us but I'm not sure," said the caller.

Vale spokesperson Angie Robson has confirmed in an email that the blasts were not related to Vale mining operations.

"Confirmed with Copper Cliff, all is fine there and not blast related, all seems to be fine at Creighton too. Doesn't appear to be from our operations," said Robson.

Many of the reports circulating social media are saying that there were two distinct events.

If you felt or heard anything please email us and let us know where you were and when it occurred editor@northernlife.ca or leave a comment below.