Steelworkers Local 6500 officials handed out documents to the media Dec. 17 which they say prove it is Vale Inco, not the union, which is preventing further negotiations from taking place.
0
Dec 17, 2009 7:40 PM By: Heidi Ulrichsen 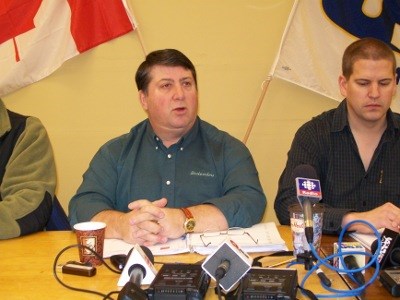 Steelworkers Local 6500 officials handed out documents to the media Dec. 17 which they say prove it is Vale Inco, not the union, which is preventing further negotiations from taking place.

More than 3,000 members of the union have been on strike since July 13, or for more than five months now. There have been no talks between the two parties since that time.

Speaking at a press conference at the union's new hall on Brady Street, the union leaders said Vale Inco will not go back to the bargaining table without the union agreeing to pre-conditions - namely changing to a defined contribution pension plan for new employees, a restructured nickel bonus plan and smaller changes to the collective agreement which the company says would bring about “efficiencies.”

The first document given to the media is a letter dated Dec. 11, which was sent by Steelworkers District 6 director Wayne Fraser to Vale Inco president and CEO Tito Martins, and the company's labour lawyer, Harvey Beresford of the law firm Hicks Morley.

The letter said that Fraser had recently talked to Greg Long, a provincial mediator, about the possibility of re-starting negotiations. Long, according to the letter, called Beresford, and passed on the union's request.

“Following that discussion with Mr. Long, Mr. Beresford then called me and stated that he did not see a point in resuming negotiations until the union was willing to concede to Vale's concessions,” stated Fraser, in the letter.

The second document, a “strictly privileged and confidential” letter from Beresford to Fraser, said Beresford was “ready to sit down with (Fraser) and explore possible solutions that will lead us to meeting with full teams in order to have resolution of our new collective agreement.”

At the same time, the letter also said that “to date, there is no reason to believe that further negotiations will be successful.”

The letter said “as recently as last week, senior USW representatives have said that the union will not accept any of the fundamental changes the company requires. The cry of 'no concessions' continues and will not get us to a new collective agreement. Our settlement proposal is fair and responsible.”

Vale Inco spokesperson Steve Ball said, as Beresford letter states, the company is willing to talk with the union about a framework for negotiations.

But sending in two negotiating teams, along with a provincial mediator, would be doomed to fail. Another set of failed negotiations would cause both sides to become even further apart, said Ball.

As well, Ball said unless the union is willing to accept the three pre-conditions set out by the company, the chances of re-starting negotiations are very slim.

Fera said that up until this point, Local 6500 has tried not to negotiate in the media, but the “company has now forced our hand.”

He said the most common question he is asked by union members is whether there is any hope of re-starting negotiations, and he wanted to show them that it Vale Inco doesn't want to negotiate, and they should get themselves “ready for a long winter.”

Fera said the same documents provided to the media were also given to the 700 people who attended a union meeting Dec. 16.

Steelworkers staff representative Myles Sullivan said when negotiations were underway last spring and early last summer, there were some changes to contract language, but when it came to the major issues, Vale Inco presented the same proposal to the union three times.

Fera said the union is considering a number of options, including mediation with a provincial mediator and bringing a bargaining in bad faith complaint against the company to the Ontario Ministry of Labour.

When asked about a possible bargaining in bad faith complaint, Ball said this was the first he'd heard of the idea, and that the company had “absolutely not” bargained in bad faith.

He also said he'd be willing to speak to Vale Inco at any time if the company was willing to drop pre-conditions.

When asked by a reporter whether releasing a confidential document to the media could get the Steelworkers in legal trouble, Fera said “What more problems can we have? They're suing everyone anyhow. I don't think one more piece of paper is going to make a difference.”

Nine strikers have also recently been sued for damages ranging from $75,000 to $120,000 because of alleged incidents on the picket lines. Local 6500 is not named in these lawsuits.

“We fully recognize that the vast majority of our employees who are on strike are doing so in a peaceful and law-abiding manner,” said Ball.“There are a few who believe a strike and being a member of a union gives them the right to act in an unlawful way.”