A Sudbury resident who was victimized as a child by a Catholic priest has received a reply to a letter he sent the Vatican last October. Jerome Myre was was 12 years old when he was sexually abused
Jan 4, 2014 1:49 AM By: Darren MacDonald 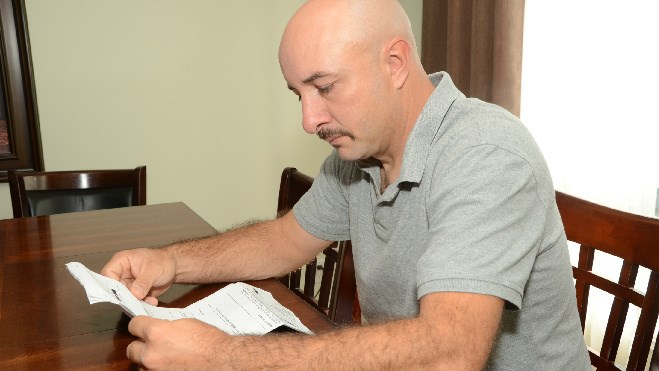 Jerome Myre is seen in this photo from October 2013. Myre was one of the victims of abuse by Fr. Bernard Cloutier when Myre was 12 years old. He wrote the Vatican last fall asking Pope Francis to remove men who have abused children from the priesthood. Myre received a reply just before Christmas. File photo.

A Sudbury resident who was victimized as a child by a Catholic priest has received a reply to a letter he sent the Vatican last October.

Jerome Myre was was 12 years old when he was sexually abused by Fr. Bernard Cloutier, a priest who was convicted in 2009 for incidents that took place in Sudbury, Espanola and Massey.

Myre, who is allowing his name and face to be made public, was one of five victims abused between 1974 and 1983. He attended a parole hearing in September, successfully opposing early release for Cloutier, 71. He and another victim read victim impact statements, helping ensure the disgraced priest serves his full sentence, which runs until October of this year.

Following the hearing, Myre told Northern Life he was sending a letter to Pope Francis, calling on the pontiff to change church rules that allow people like Cloutier to technically remain priests.

“I think it would show some good faith to victims around the world,” Myre said at the time. “To me, they shouldn't have any status whatsoever.”

While skeptical of getting response, Myre said it would be the least the church could do for victims of abuse across the world. But just before Christmas, he received a letter from the Vatican.

While not from Francis himself, as he had hoped, the missive was signed by Monsignor Peter B. Wells, an American who is the assessor of general affairs with the Vatican Secretariat of State. It's a group that handles correspondence within the church.

“I am writing to acknowledge your letter of 20 October 2013, which you addressed to the Holy Father,” Wells wrote. “In this regard, I would inform you that your letter has been transmitted to the Congregation for the Doctrine of the Faith, which has competence in such matters.”

According to the Vatican's website, the Congregation for the Doctrine of the Faith is a powerful group whose job it is “to promote and safeguard the doctrine on faith and morals in the whole Catholic world.

“It helps the bishops, individually or in groups, in carrying out their office as authentic teachers and doctors of the faith, an office that carries with it the duty of promoting and guarding the integrity of that faith.”

Myre says he was surprised to get the letter, and will wait a couple more months to see if any action is taken before writing again. But he's doubtful things will change.

“At least I did get a response,” he said Friday. “But I think it's damage control, and obviously, there's been a lot of damage.”

The Pope has made headlines around the world with his approach to leading the world's Catholics. He has called for the faithful to be less judgemental and more loving, and for an increased emphasis on spirituality.

But Myre said he would be more impressed if Francis made major moves in terms of gay rights, ordination of women and, of course, defrocking priests convicted of abuse.

“Those are things he could do to show some backbone and prove he's serious,” he said.

While something allowing women to become priests would likely be divisive, Myre said it's hard to see why anyone would object to stripping abusers and rapists of the title of priest.

“It's pretty straightforward,” he said. “I mean with these guys, there's no doubt.”

Myre also said a recent attempt at mediation between his lawyers and lawyers for the Diocese of Sault Ste. Marie ended badly. Myre is part of a lawsuit filed by the firm Ledriot Beckett Litigation Lawyers, seeking compensation for the harm Cloutier caused him and other victims.

“I can't get into specifics, but we asked for $100, they offered us a penny,” Myre said, adding the case will likely go to trial in Sudbury in June.

He'd rather see the case go to open court so all the facts of what happened could come out in public. However, if there was a generous offer, one that would allow him to make a significant donation to charity or group that helps children, he'd settle.

“That's what I told my wife and my lawyer – it would have to be a pretty good offer.”

He's been told that there will likely be one more try at mediation before June, since he's been told that often, the first meeting is when defence lawyers try to settle for a minimum amount. However, he said it may go to trial, because whatever he and the other victims receive will set a precedent for other cases headed to civil court.

Here is the full text of the letter from the Vatican sent by Monsignor Peter B. Wells, the assessor of general affairs with the Vatican Secretariat of State:

I am writing to acknowledge your letter of 20 October 2013, which you addressed to the Holy Father. In this regard, I would inform you that your letter has been transmitted to the Congregation for the Doctrine of the Faith, which has competence in such matters.

I am pleased to assure you of a remembrance in His Holiness's prayers.

With every good wish, I am