Sudburians would have a true alternative to Air Canada should WestJet decide to begin scheduling flights out of the airport, says an official with the local airport.
Jan 3, 2013 2:30 PM By: Darren MacDonald 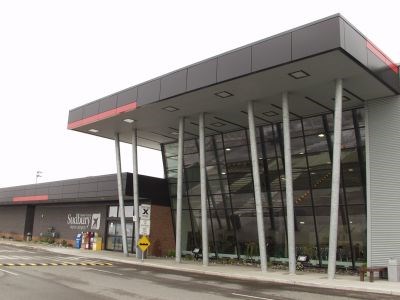 The growth of the Sudbury Airport over the last year makes a strong case to attract WestJet, which is set to announce whether it expand in western or eastern Canada. File photo.

Sudburians would have a true alternative to Air Canada should WestJet decide to begin scheduling flights out of the airport, says an official with the local airport.

But unlike Porter, WestJet flies into Pearson International, allowing travellers to connect to international flights, which Glabb says would be a significant boost to local travellers.

“They have a vast network now,” Glabb said. “And I think that would mean a great deal to people in our community, to be able to make that connection.

“So we want to keep growing our market so that when and if WestJet decides to come here, we have the market and the people to support that.”

WestJet will announce later this month whether it will begin its expansion in western or eastern Canada.

It’s looking at adding 10 airports to its routes, adding one plane a month to its fleet starting sometime in the spring. The new routes will be under the WestJet Encore name, which will operate smaller jets that will be more profitable in smaller markets.

Sudbury’s airport is a strong candidate, considering the growth it has enjoyed in the last few years. In all, 90 jobs have been added at the airport since 2000, bringing total employment to about 200.

Sudbury was one of 32 airports to meet with WestJet in June in a speed-dating-style presentation, where each group had a short time to make their pitch. Glabb said while some cities offered incentives to WestJet, Sudbury’s pitch focused on the local market.

“Eventually if an airline doesn’t have passengers on their aircraft, it won’t last. Our approach always is to do our research and make sure we have the market. And we explain that to any airline.”

Jennifer Sanford, who works in media relations with WestJet, said in an email that Sudbury’s strong economy would be an asset, but it’s just one factor they consider.

“We look at the local economy and that of the outlying trading area,” Sanford said. “For example, are there large industries or employers in the area? We look at both business and leisure travel and we look at both ends of the telescope. Who will be travelling to this new destination, and will people who live there want to travel, as well?

“In the end, the airline must be satisfied that the community can and will support air service on a long-term basis.”

She also said even if Sudbury doesn’t make the first cut, that doesn’t mean they won’t eventually get WestJet Encore service. The airline is looking to add 5-7 Bombardier Q400 NextGen aircraft in 2013, and more in 2014.

That’s significant because WestJet tried – and failed – to make a go of it in Sudbury in 2001 with the much larger Boeing 737s. The Q400s are smaller, so passenger traffic wouldn’t have to be as large for WestJet to turn a profit.

For her part, Glabb said they’re working to show Sudbury’s business travellers that flying to Toronto rather than driving is a better alternative.

“Sudbury’s in a tough spot because, realistically, with the improvements on Highway (69), it’s about a 3.5-hour drive,” she said.

While she doesn’t know more than anybody else regarding WestJet’s intentions, she said Sudbury’s success with Porter can only help.

“We know what competition has done for us,” Glabb said. “We’ve proven it with Porter. There are a lot of people on the highway, and we said if you come into our market, you’ll get some of these people off the highway and into planes. And that’s what happened.

“We have our success story, and that bodes well when we’re meeting with any airline.”