On Thursday, a group that has been working out of the spotlight for the last three years will unveil a proposal to build a multi-use arts and convention centre in Greater Sudbury it says can break even in its first year of operation.
Jun 2, 2015 5:33 PM By: Darren MacDonald 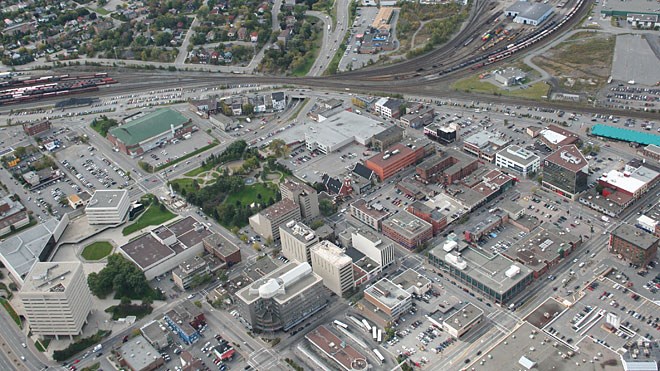 The chair of a local seniors group says the city needs to come up with a way of creating and protecting jobs. File photo

On Thursday, a group that has been working out of the spotlight for the last three years will unveil a proposal to build a multi-use arts and convention centre in Greater Sudbury it says can break even in its first year of operation.

Paul Finley, project manager of the Sudbury Synergy Project, said the group intentionally kept a low profile as it conducted research and marketing plans to determine whether the project was feasible.

"We wanted to stay as low (profile) as we could until we believed that we had a legitimate project, one that can speak for itself, and rationalize itself," Finley said.

A former economic development officer with Greater Sudbury, Finley said the key element of the $65-million project is making use of technology capable of transforming the 127,000 square-foot building from a convention centre to a performing arts centre.

"Through modern day miracles of science and technology, we've come up with a building concept — it's more than a concept, it's a design that is operating in at least 300 other jurisdictions around the world — using transformation technology," he said.

"It's rudimentary technology that they've been using in the automotive assembly field for 30 years ... It's motor-driven, computer-operated, setting the building up so that walls, floors, ceilings — everything moves."

Videos linked to the project's website shows how such facilities work. One video shows the transformation of the Lausanne Swiss Tech Convention Center in Switzerland, as well as the Riverrock Gala in Richmond, B.C., and the Mont Jacob Cultural Centre in Jonquière, Que.

The concept in Sudbury is to develop a facility that can "host a trade show in the afternoon and tonight, at 7:30, the symphony plays in a state-of-the-art facility," Finley said.

So the facility could either be a single room hosting a concert with more than 1,400 people, or become three separate halls holding 400-500 people each. Or it could become just one big room with no seats to host a 1,200-person convention.

If you're curious what the transformation looks like, check out this video of the Lausanne Swiss Tech Convention Centre, by Gala Systems (https://www.youtube.com/watch?v=P62Evb3OTg0), which makes use of the same technology that would be used in the Sudbury Synergy Centre.

The technology works especially well in mid-sized markets, he said, where there is demand for a broader ranges of venues, but the city is too small to sustain standalone facilities.

"So you have to develop a multi-purpose concept," he said, adding that their market study showed that "we can break even in year one — that's year one.

"Sudbury's biggest challenge right now is that we don't have facilities to host, not only world-class events, but, say, regional tours of mid-sized touring groups."

"So they go to North Bay, they go to Parry Sound, they might go to Sault Ste. Marie, but they don't come to Sudbury because we don't have a venue," Finley said. "There's a whole sweet spot that Sudbury just is not eligible for in the 1,000-1,500 person seating category."

The building would also be able to host major conventions that currently skip Sudbury because the city doesn't have facilities to hold them. Even hosting a handful of such events a year would be a major boon to the city's economy.

"I know that business reasonably well,” he said. “There are so many conventions that Sudbury can't even think about hosting. And we're a centre for mining. But we can't host them. Why? Because we can't assemble everybody in one place for a banquet and a trade show and a conference.

"And there's lots of them. If you could attract even three or four initially a year, that's big business."

And the proposed centre could help attract other investments, in particular a three- or four-star hotel, Finley said. Locating near the convention centre would guarantee the new hotel would be full during conventions, and would benefit existing hotels, as well.

"So there's all kinds of potential, and Sudbury has been missing the boat for too long."

While a location hasn't been finalized, he did say downtown has a lot of advantages and the facility could spur economic growth in the area.

"It's not the exclusive potential site, but downtown, it could very much be a central part of a mix-used redevelopment of the downtown core."

At Thursday's newsconference, Finley said they'll reveal details on where they are at in the process, next steps and timelines.

"And a few other little surprises," he added.

The Sudbury Synergy Project is holding a media information session on June 4 about the project.