Wynne back in Sudbury as poll shows tight race (9 photos) 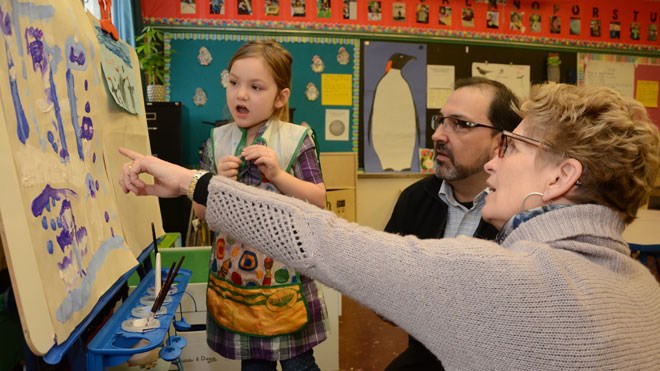 “Polls come and go,” Wynne responded. “Really, when you're in a campaign, you have to do what you do -- and that is reach as many people as possible and let them know who you are. And that's exactly what Glenn's been doing.”

The poll, of 689 voters surveyed on Wednesday in the city, found Thibeault was leading NDP challenger Suzanne Shawbonquit by three percentage points, 33 per cent to 30 per cent. Independent challenger Andrew Olivier was at 22 per cent, PC candidate Paula Peroni was at 11 per cent, while Green candidate David Robinson was at three per cent.

That's a significant change from Forum's Jan. 13 poll, which pegged Olivier at one per cent, Shawbonquit at 42 per cent and Thibeault 40 per cent.

“This looks like an evenly matched race, where Thibeault’s familiarity in the riding is matched by the strong New Democratic roots in Sudbury, which favour Shawbonquit,” said Forum Research president Dr. Lorne Bozinoff, in a release accompanying the poll. “The wild card is spurned Liberal candidate Andrew Olivier, who may yet prove to be a giant killer.”

Thibeault said regardless of any poll, he will stick to his game plan.

“There's two weeks left, and I think there's a lot more doors I need to knock on and talk to people,” he said. “Polls are polls, but I just need to make sure I talk to as many people as I can about the issues and trust that I can earn their vote on Feb. 5.”

The Forum Poll was an interactive voice response telephone survey of 689 randomly selected residents in Sudbury riding 18 years of age and older. The poll was conducted on Jan. 21. Results based on the total sample are considered accurate plus or minus four per cent, 19 times out of 20.

When asked about local efforts to bring a PET scanner to Sudbury, Thibeault said he was committed to fighting for improved health care for residents.

“It's one of those things I've been hearing on the ground as I go door-to-door,” he said. “It's one of the things I've heard from the community, and we all know there's a group within our city that is advocating for one. And so as the MPP it's my job – first off, I have to get elected – then it will be my job to head down to Queen's Park and raise those concerns.

“If it's a PET scanner, if it's a second MRI, we need to have those consultations with the folks on the ground and the hospital. And I'm happy to continue to raise my voice on that issue.”

“That's the discussion that has to happen in the community.”

Wynne laughed when asked whether she would be renting a hotel room for the next two weeks ahead of voting day.

“I'm sure I will be back again,” she said. “Campaigning with Glenn has been a terrific opportunity. He's a great candidate and will be a great representative for Sudbury – should the people of Sudbury choose him on the 5th.”