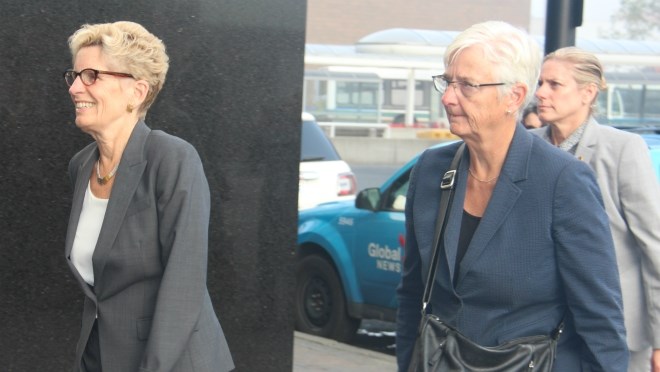 A lacklustre showing in the June 2014 election and policy differences were among the reasons Premier Kathleen Wynne wasn't excited to have Andrew Olivier be the party's candidate in the 2015 byelection, the premier testified in Sudbury court Wednesday.

With the courtroom packed with media and others for the first time, and with a phalanx of cameras and reporters waiting outside, Wynne testified that Olivier's stance on merging school boards was contrary to the party's policy. Plus they had lost the riding, despite winning a majority government.

“He hadn't been a great candidate in the general election,” Wynne said. “But this was a young man interested in politics, and we wanted to keep him involved.”

Tuesday was Day 5 of the bribery trial involving Liberal fundraiser Gerry Lougheed Jr. and former Liberal campaign director Patricia Sorbara. Both are accused of offering inducements to Olivier not to be a candidate in the byelection, an offence under Ontario's Elections Act. Sorbara is also accused of offering Glenn Thibeault inducements to leave the federal NDP and run for the provincial Liberals in Sudbury.

The defence case rests in part on the argument that Wynne had already decided Thibeault was going to be the candidate, and the offers to Olivier were to keep him involved with the party. Officials were hoping he would back Thibeault's acclimation as the candidate.

Wynne says she knew of Lougheed when she was elected party leader in 2013.

“When I became leader, he was one of the people who was important in the riding,” Wynne said.

Court heard Wednesday that it was Dominic Giroux, then president of Laurentian University, who alerted the Liberals to the fact Thibeault may be interested in running. Court also heard that Giroux advised Thibeault to hold out for a cabinet post, and had even suggested that former MPP Rick Bartolucci, Olivier and Wynne hold a news conference to announce Thibeault's candidacy.

Wynne said Wednesday those were Giroux's thoughts, and weren't part of the conversation she had with Thibeault.

“Dominic was trying to be helpful, but this was someone outside of the political process,” Wynne said. “Mr. Giroux did not have any role in determining who the candidate would be … He was not someone I was relying on in any way.”

Wynne met with Thibeault on Nov. 30 at her home, 10 days after Joe Cimino's shocking announcement he was resigning, after winning the seat for the NDP just a few months earlier.

“Glenn and I connected, we liked each other,” Wynne said of the meeting. “He believed in what we were doing as a government. He seemed like a sincere and smart man.”

But Thibeault wanted time, Wynne said, and was particularly concerned with the impact on his family.

“It's a big deal for a politician to cross the floor,” she said.

She made it clear to him, Wynne said, that he would not be made a cabinet minister without first gaining experience and knowledge of how Queen's Park worked.

“I believe that's a better way to approach any changes to cabinet,” she said. “I made it clear to Glenn that was my belief and that was my practice.”

Wynne said she was “optimistic” that others in Sudbury would view Thibeault as such a great candidate, they would put differences aside.

Thibeault agreed Dec. 11 to be the candidate, and Wynne said Lougheed was a natural choice to speak with Olivier.

“We wanted to keep him a member of the Liberal family,” she said.“That was the nature of the outreach to Andrew Olivier.

“It was a difficult moment for him, because we had decided Glenn Thibeault was going to be the candidate. (So) Gerry was going to talk with Andrew, and there was a question whether I should have a conversation with him.”

Wynne said she was in a similar situation years ago, having lost a nomination contest, as well as her first foray into municipal politics. No one reached out to her after the losses, something she would have appreciated.

“It was my personal experience that informed this,” she said.

Wynne says she told Olivier that her mind was made up, Thibeault was going to be the candidate, but it would be great to have Liberals together at the announcement. But she said Olivier talked about how he wanted an open nomination process, and she was concerned he wasn't understanding her point.

“We went around that a number of times,” she said. “It was made clear to him I was prepared to appoint Glenn Thibeault.

“I didn't know what his position was,” Wynne said. “There still wasn't clarity on what Andrew Olivier was going to do.”

She talked about positions within the party, but made it clear they weren't slam dunks.

“There's always a process, and he would have to make a choice about whether he wanted to go through those processes,” Wynne said. “These were not things that could happen immediately.

“He was not forthcoming about his position … He could not have been happy about his situation, and I got that.”

After meeting with Lougheed and speaking with Sorbara and Wynne, Oliver held a news conference Dec.15, 2014, that sparked the entire investigation and the current charges.

At that point, Wynne said she came to Sudbury to meet with a very unhappy riding association, who mostly had a negative reaction to the Thibeault news.

“But there was real optimism on the part of many members that Glenn Thibeault was willing to run for us,” she said.

Lougheed defence lawyer Michael Lacy asked whether she had decided after the Nov. 30 meeting with Thibeault that there wouldn't be an open nomination process.

And after he decided to run, Wynne made a commitment to Thibeault that he was going to be the candidate

“You weren't changing your mind, were you?” Lacy asked.

Sorbara lawyer Brian Greenspan brought up the results of the June 2014 election. While Sault Ste. Marie and Thunder Bay went Liberal, in Sudbury, the party lost the riding to the NDP.

While Olivier lost by 980 votes, and Bartolucci won in 2011 by 531 votes, Greenspan said Thibeault won reelection by almost 10,000 votes.

“It's pretty clear Mr. Thibeault was a very popular candidate in Sudbury,” Greenspan said. “This is someone who could win the riding back.”

“Absolutely,” Wynne replied. “I believed ... anyone in the Sudbury area looking at this would see Glenn Thibeault as a very strong candidate.”

After Wynne finished her testimony, Andre Bisson, the former vice-president of the Sudbury riding association, took the stand.

While officially neutral on the candidate issue, Bisson admitted he offered advice privately to Olivier. While publicly calling for the party to avoid a messy fight in the media, he was advising Olivier on how talking points he should use in interviews with the media.

"You were encouraging him to go the media?" Lacy asked.

“Mr. Olivier was not a candidate at that time, correct?” Lacy asked.

Lacy then showed a document issued by Brisson detailing an invite to an association meeting that described Olivier as the past candidate.

Lacy also pointed to an analysis Bisson sent to Sorbara that recommended an acclimation or appointment to avoid a messy nomination battle.

Bisson replied that that was the feeling of the membership, and that he personally supported an open process.

"What I wanted for (Olivier) to have an opportunity to fight for an open process," Bisson said.

"No you didn't," Lacy said, pointing to the analysis he had sent Sorbara.

That was what people at the riding association supported, Bisson said, and it was “information I thought they needed to know.”

So he advised the party have an “optically open” nomination process, which amounted, Lacy argued, to an acclimation.