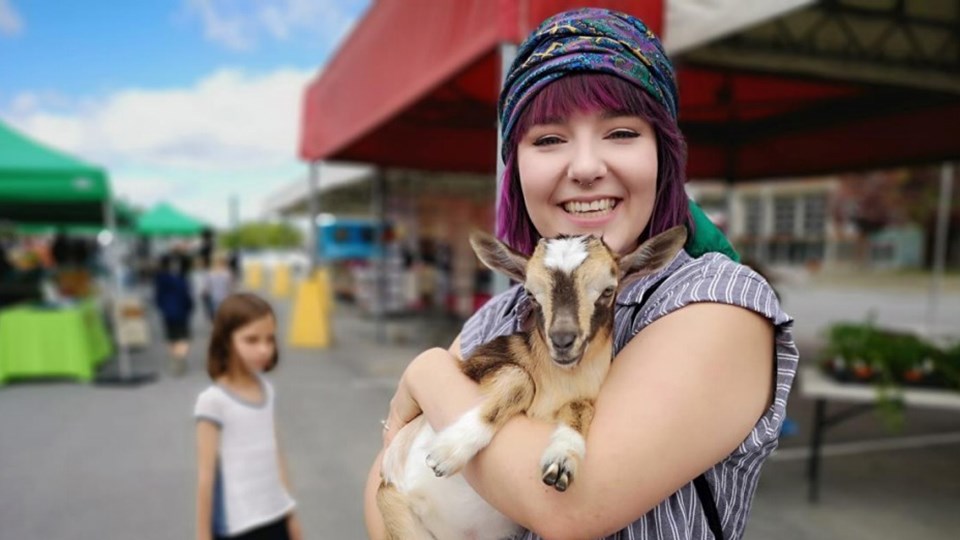 When a woman showed up at the market last summer with baby goats, pictures were quickly posted to social media, helping draw crowds. (Supplied)

It will still need some support for the next few years, but the people running Greater Sudbury's farmers' market say the first year under a new board was a big success.

Peggy Baillie, chair of the Greater Sudbury Market Association, said they signed a contract with the city in the spring to have independent board oversee the market.

“This moment was many years in the making,” Baillie told members of the community services committee, pointing to a photo of the contract being signed.

After losing its home to the school of architecture several years and relocating to the former train station on Elgin Street, the Market is emerging in a new form.

As well as its new board of directors, they began a Thursday market on York Street across from Bell Park – one that drew more visitors than the Saturday one downtown.

“One of the great parts of our market is our Thursday market,” Baillie said, adding that it's one of the busiest intersections in the city, providing a large potential customer base.

The board introduced several new activities, include an adopt-a-pet day and an event for kids where they got to paint a school bus.

“It was raining, but it did not stop the kids from enjoying the opportunity to paint their school bus,” Baillie said.

Third-year architecture students also did installations at the market, adding a cool feature for visitors.

The board also introduced a new designation for vendors, following controversy from a CBC story that revealed many sellers at markets are not farmers and are not local.

So each vendor is labelled, she said, as a grower, artisan or provider so people know who they are buying from.

The market became a bit of a viral sensation last summer Baillie said, on “the day the baby goats appeared.” A woman brought her baby goats and they were a hit with customers, who posted pics on Instagram and Facebook.

“When you have baby goats someplace, people flock to the market,” she said. “They were incredibly cute.”

A new business that recently opened a downtown Sudbury storefront — Salty Dog Bagels – has developed from being a vendor at the market, said Thomas Merritt, another board member.

“The market really does have value as a business incubator,” Merritt said. “Old Rock started as a market business.”

Both downtown and York Street saw growth in visitors last year, Baillie said, and the first-year board came in under budget, spending $45,700 out of a budget of $54,287.

Ward 8 Coun. Al Sizer wondered how long the board would need the annual $20,000 the city provides. But Ward 5 Coun. Bob Kirwan said even after a strong first year, the city money would be important for at least a couple more years.

Baillie said for the board, having some cash flow is huge since expenses are year round, but income is seasonal. In the first few years, they want to be able to build a nest egg to fund long-term plans to grow the market further.

“And having that support means we have long-term financial stability while we find our footing,” Merritt said.

Baillie said revenue from vendors doesn't cover operating costs, and until it does, they need to “tread carefully” as they work toward full independence.

“That’s what we’re all striving for, and we definitely see that momentum happening,” she said.

In response to questions about opening a third market in New Sudbury, Baillie said “there are lots of possibilities,” but they need to ensure they don't operate too many markets, or they risk the sustainability of them all, as other cities have discovered.