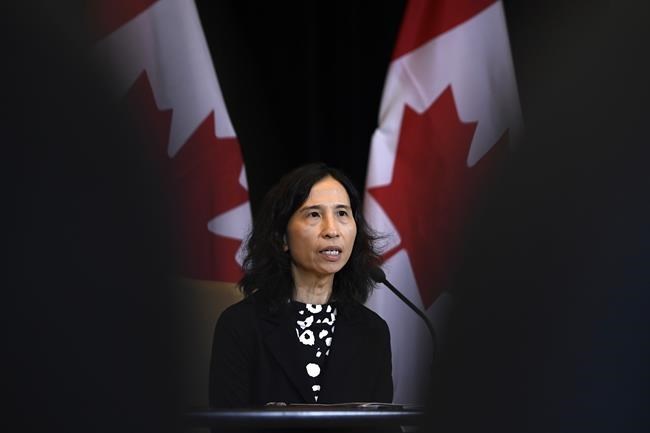 Canada has so far been able to detect and isolate cases of coronavirus as patients arrive in Canada thanks, in part, to passenger screening at international airports. So far Canada has confirmed 11 cases of the virus.

The most recent patient, a British Columbia man in his 40s, contracted the virus after coming into close contact with a woman who was infected on a recent trip to Iran. He showed symptoms before the woman was diagnosed.

The virus has also begun to spread from person to person in several countries outside China, where COVID-19 was first detected. The last few days have seen sudden increases of cases in Italy, Iran and South Korea.

"These signs are concerning, and they mean that the window of opportunity for containment, that is for stopping the global spread of the virus, is closing," Tam said. "It also tells countries like Canada, who have been able to detect and manage imported cases thus far, that we have to prepare."

The main concern is that people without symptoms, or with only very mild symptoms, could be spreading the virus in countries that don't have the means to detect cases, Tam said.

The government has also updated its advice to travellers returning from abroad and has asked them to monitor themselves for symptoms of COVID-19 for two weeks after they return, no matter where they travelled. Those are similar to the symptoms of influenza: a cough, runny nose, sneezing, sore throat, fever, fatigue and aches.

"We can highlight countries that are currently impacted by the coronavirus, but it is important when you travel anywhere to take these general precautions," Tam said.

Health Minister Patty Hajdu said the public-health agency will be tracking other close contacts of the two most recent cases in B.C. to check on their health.

She said this situation is indicative of the global crisis, especially in countries like Iran where the virus spread initially without the government's knowledge.

"It is very important that we shift our focus to our domestic situation," Hajdu said.

The most important action the government can take at airports is to educate people as they come into the country, Tam said, so they know what signs and symptoms to look for and what to do if they have concerns.

The World Health Organization says it's still too early to declare COVID-19 a pandemic — the definition requires that a disease be detected just about worldwide — but the spread of the bug in multiple countries is a major concern.

"This is not the time to focus on what word we use. That will not prevent a single infection today, or save a single life today," said WHO director general Dr. Tedros Adhanom Ghebreyesus, in a briefing. "This is a time for all countries, communities, families and individuals to focus on preparing."

Canada's priority wouldn't change even if a pandemic were declared, Tam said. The goal is still to hold the virus off for as long as possible before it starts spreading from person to person within the country.

"By delaying even a little bit we might be able to reduce the impact now, and making sure our health system has gone past influenza season is a very specific public-health objective," she said.

Getting past the flu season without a major outbreak would seriously ease the burden on hospitals, she said.

It's not just up to the health system to get ready for a possible outbreak in Canada, Tam said. Workplaces also need to prepare. Part of that preparation will include encouraging people who are sick to stay home, despite the tendancy for Canadians to show to up work even when they're not feeling well, Tam said.

Another case of the virus has also been confirmed by health officials in Toronto, who said a woman in her 20s contracted a mild case while travelling in China. The woman had been in China since late last year, had travelled to Wuhan — the centre of the outbreak — before it was quarantined, then went elsewhere in the country before returning to Canada on Feb. 21.

"Given the fact that she actually is resolving and is quite well, the patient was discharged, was told to self-isolate and I'm pleased to say is presently recovering well at home and in isolation," said Dr. Eileen de Villa, Toronto's top public-health officer.

The woman wore a mask while travelling back to Canada, and a family member who picked her up from the airport also wore a mask, de Villa said.

Dr. Barbara Yaffe, Ontario's associate chief medical officer of health, said given the limited contact with others and the woman's mild illness, she likely presents a low risk.

Meanwhile hundreds of Canadians remain in mandatory quarantine after they were repatriated from Wuhan, China, and the Diamond Princess cruise ship, which was stricken with the virus earlier this month.

All of the evacuees are in good health and show no signs of the virus, Tam said. Those from Wuhan who have been isolated in the Canadian Forces Base Trenton for two weeks are expected to be released tomorrow, the second large group of evacuees to be allowed to go home.

—With files from Allison Jones in Toronto

Military to help fight COVID in Quebec; deaths pass 150 as cases near 12,000
Apr 3, 2020 11:49 AM
Comments
We welcome your feedback and encourage you to share your thoughts on this story. We ask that you be respectful of others and their points of view, refrain from personal attacks and stay on topic. To learn about our commenting policies and how we moderate, please read our Community Guidelines.