IQALUIT — A bill passed in the Nunavut legislature that will shape how Inuit languages are taught in school for years to come is being called a form of cultural genocide.
Nov 10, 2020 7:00 PM By: Canadian Press 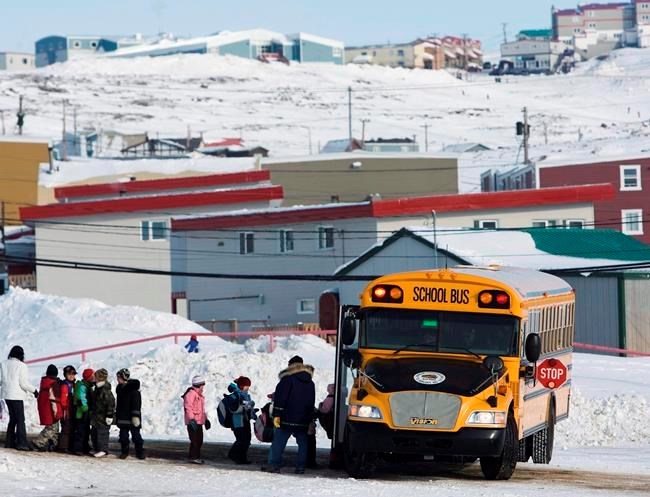 IQALUIT — A bill passed in the Nunavut legislature that will shape how Inuit languages are taught in school for years to come is being called a form of cultural genocide.

The territory's original Education Act guaranteed bilingual education in Inuktut and English at all grade levels by the 2019-2020 school year, but amendments that passed third reading last week change that.

Inuktut, the umbrella term for all Inuit languages, is now to be phased in as a language of instruction over the next 20 years. That means it will take until 2039 for Inuktut to be available as a course in all grades.

The amendments also meld the Inuit Language Protection Act with the Education Act.

“While we all want to see the delivery of bilingual education in our schools as soon as possible, we also know that we need to build a strong foundation that will enable us to reach this goal effectively,” Education Minister David Joanasie told the assembly last Wednesday.

In Nunavut, 65 per cent of the population speaks Inuktut as its mother tongue, says Statistics Canada. In 2016, 89 per cent of Nunavut’s Inuit population reported being able to have a conversation in Inuktut.

James Eetoolook, acting president of Nunavut Tunngavik Inc., the land-claims organization that represents the territory's Inuit, says the legislation fails to protect Inuit language rights. He says he is concerned “that the Inuktut language and culture are being eliminated in the schools of Nunavut.”

It's not the first time Nunavut has tried to amend its Education Act. In 2017, the government introduced a bill that was killed by MLAs before it reached third reading.

The latest bill, introduced in June 2019, was criticized from the beginning by groups that included Nunavut Tunngavik. The proposal was scrutinized through televised hearings and in-private committee meetings. The final bill included eight amendments.

Another concern Eetoolook has is that the new legislation, which must still be proclaimed into law, does not address teacher employment.

Eetoolook says Nunavut Tunngavik, which encouraged members of the legislature to vote against the bill, wants the government to bring in an Inuit employment plan “with a timeline for training and hiring adequate numbers of Inuktut-speaking educators.”

“Replacing Inuit rights with a timetable for adding an Inuktut language arts course to the curriculum ... is not a suitable alternative,” an NTI news release says.

During a review of the bill last week, MLA John Main said recruitment of Inuktut-speaking teachers will be “critical to the success of this legislation.”

Main also said MLAs recognized that the timeline to deliver Inuit language instruction was “identified by many as a major issue.”

“Members recognized that there are strong expectations from Nunavummiut in this area, and there is a very real fear of language loss and the feeling that we are running out of time,” he said.

The legislation states it must be reviewed every five years to make sure its provisions are proving effective and are being achieved.

“Future ministers of education will need to be staunch champions of their ministry, while future members of the legislative assembly will need to hold them accountable,” Main said.

James Arreak, chairman of the Coalition of Nunavut District Education Authorities, said he believes the legislation takes authority away from Inuit communities.

“Schools and communities are now firmly under the control of the bureaucracy and the (government) really has decided to do this alone. They alone will be held responsible for the outcomes,” Arreak told The Canadian Press.

Joanasie says the government will continue to work with NTI and other stakeholders as the legislation is rolled out.

The new law will also extend the goal of having government operate in Inuktut to 2040 from the original one of 2020 set by Nunavut's first territorial administration in 1999.