Floyd mourned and U.S. not investigating Prince Andrew; In The News for June 9 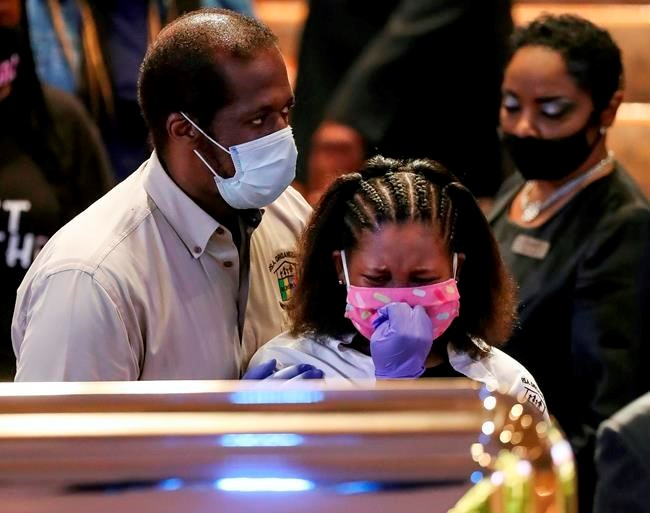 In The News is a roundup of stories from The Canadian Press designed to kickstart your day. Here is what's on the radar of our editors for the morning of June 9 ...

A new poll suggests Canadians are increasingly wearing protective face masks as they emerge from months of isolating at home to curb the spread of COVID-19.

And it suggests that fear of a second wave of infections as bad or worse than the first wave may be behind their increased caution.

Just over half of respondents to the Leger and Association for Canadian Studies survey said they have worn masks to go grocery shopping, 45 per cent to go to the pharmacy, 17 per cent at work, 14 per cent on public transit and 12 per cent when they've gone for walks.

In each case, the percentage saying they have worn masks has gone up by two to eight points in one week.

Fifty-three per cent — up two points — said masks should be mandatory in public and confined spaces.

The online poll, conducted June 5 to 7, surveyed 1,523 adult Canadians; it cannot be assigned a margin of error because internet-based polls are not considered random samples.

Ford says the plan will help support parents who are returning to work as Ontario's economy gradually reopens.

Ford said Monday that most Ontario regions outside the Toronto area will be allowed to open more businesses and activities on Friday.

Restaurant patios, hair salons and swimming pools will reopen as the province takes a regional approach to restarting the economy.

The limit on social gatherings will increase from five to 10, but people must still stay two metres away from anyone outside their own household.

Some child-care centres in the province have remained opened throughout the pandemic to provide free service to the families of essential workers.

Two RCMP officers have been charged in the shooting death of a 31-year-old man in northern Alberta almost two years ago.

Cpl. Randy Stenger and Const. Jessica Brown of the Whitecourt RCMP detachment were arrested Friday and were each charged with one count of criminal negligence causing death, the province's police watchdog said Monday.

The Alberta Serious Incident Response Team (ASIRT) said that Clayton Crawford died from multiple gunshot wounds inside a car after a confrontation with police on July 3, 2018.

Mounties had been investigating another shooting the day before at a home in Valhalla Centre, Alta., about 65 kilometres northwest of Grande Prairie. ASIRT said the officers were looking for a witness or possible victim in that case, when they discovered a man sleeping in the driver's seat of a vehicle parked at a rest stop near Whitecourt.

During the confrontation, the vehicle was "put into motion" and one officer fired a service pistol while the other discharged a carbine rifle, the agency said.

Three days after kneeling publicly in solidarity with anti-racism protesters in downtown Toronto, the city's police chief announced his plans Monday to step down this summer.

Mark Saunders, whose contract was set to expire in eight months, told a news conference he would leave his job on July 31. He said after decades of serving in the force, he wanted to spend more time with his family.

"I look forward to being a full-time dad and a full-time husband that's not an exhausted byproduct that walks through the door at the end of the day," he said.

The surprise announcement comes amid growing anti-racism protests triggered by the death of George Floyd — a black man who died last month in Minneapolis after a white police officer pressed his knee into his neck for several minutes.

The protests that started in the U.S. have since spread to cities around the world, including Toronto, where thousands have taken to the streets to demand police reform.

Saunders, the department's first black chief, took over the organization in 2015 after three decades on the job, including many as a homicide detective.

The last chance for the public to say goodbye to George Floyd drew thousands of mourners Monday to a church in Houston where he grew up, as his death two weeks ago continues to stoke protests in America and beyond over racial injustice, and spurred France to abruptly halt the use of police choke holds.

Reflecting the weight of the moment, the service drew the families of black victims in other high-profile killings whose names have become seared in America's conversation over race — among them Eric Garner, Michael Brown, Ahmaud Arbery and Trayvon Martin.

"It just hurts," said Philonise Floyd, George Floyd's brother, sobbing as he ticked off some of their names outside The Fountain of Praise church. "We will get justice. We will get it. We will not let this door close."

Under a blazing Texas sun, mourners wearing T-shirts with Floyd's picture or the words "I Can't Breathe" — the phrase he said repeatedly while pinned down by a Minneapolis police officer — waited for hours to pay their respects as Floyd's body, dressed in a brown suit, lay in an open gold-coloured casket. Some sang "Lean on Me" and Houston's police chief bumped fists and embraced others in line. Funeral home spokeswoman La'Torria Lemon said at least 6,000 attended the service.

Some knew Floyd in the nearby housing projects where he grew up. Others hours or drove in from other states. Those who couldn't make it whipped up their own tributes: In Los Angeles, a funeral-style procession of cars inched through downtown as the viewing began in Houston. In Tennessee, residents of Memphis held a moment of silence.

Bracy Burnett approached Floyd's casket wearing a homemade denim face mask scrawled with "8:46? — the length of time prosecutors say Floyd, who was black, was pinned to the ground under a white officer's knee before he died.

Attorneys representing Britain's Prince Andrew say they've been assured by the U.S. Department of Justice that he is not a target in the investigation of the late sex offender Jeffrey Epstein.

The firm, Blackfords LLP, said U.S. authorities requested the help of the son of Queen Elizabeth II for the first time in January after having investigated Epstein for 16 years. He has offered three times to do so — contrary to the statements of U.S. Attorney Geoffrey Berman, the firm said.

"Importantly, the DOJ advised us that the Duke is not and has never been a 'target' of their criminal investigations into Epstein and that they sought his confidential, voluntary co-operation,'' the attorneys said.

The firm issued the unusual statement after reports in Britain's Sun newspaper and on NBC that American authorities had formally requested that Andrew answer questions on the matter. He categorically denies wrongdoing and has repeatedly insisted that he was willing to with U.S. authorities.

Berman has instead said that Andrew has provided "zero " to the American investigators who want to interview him as part of their sex trafficking probe.

The contrasting views of what is going on behind the scenes came after The Sun newspaper reported that the DOJ submitted a mutual legal assistance request to Britain's Home Office. Such requests are used in criminal cases under a treaty and are generally used when material can't be obtained on a police basis.

This report by The Canadian Press was first published June 9, 2020