New projections suggest Ontario's surging COVID-19 caseload is likely to strain its health-care system to the point where surgeries will be cancelled, while Quebec's premier is raising the possibility of school closures around the holidays and Albert
Nov 12, 2020 6:38 PM By: Canadian Press 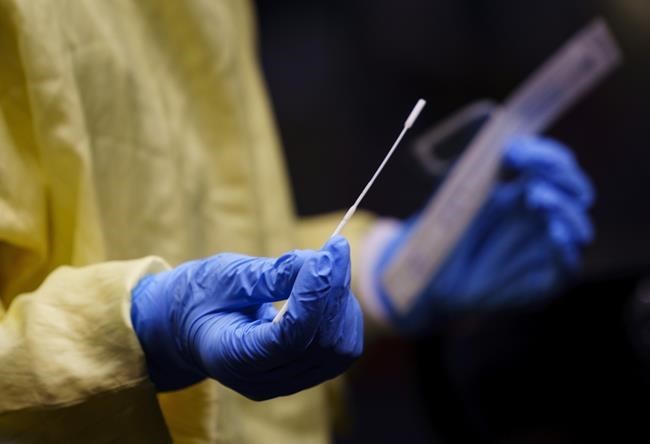 New projections suggest Ontario's surging COVID-19 caseload is likely to strain its health-care system to the point where surgeries will be cancelled, while Quebec's premier is raising the possibility of school closures around the holidays and Alberta is tightening restrictions.

Those were three major developments Thursday as the situation with the stubborn pandemic darkened on several fronts across Canada.

The latest modelling suggests that a five per cent virus growth rate, which Brown called a "slightly optimistic" scenario, would put Ontario on track for 6,500 new cases a day by mid-December. Under a three per cent growth rate, it would be 2,500 cases daily.

Just two weeks ago, it had been predicted that new daily infections would hold steady between 800 and 1,200 for a while.

Brown said that under any of the latest projected scenarios, intensive care occupancy would exceed the key threshold of 150 beds across the province.

"It's that point at which we need to start cancelling planned surgeries and we can no longer deliver the full slate of planned care right now," he said.

The Ontario Medical Association, which represents tens of thousands of physicians, urged the provincial government to lower thresholds that determine when restrictions should be tightened — by as much as 50 per cent in some cases.

The plea followed a Toronto Star reported that the provincial government ignored the advice of its own public health agency in designing the tiered and colour-coded alerts introduced last week.

Premier Doug Ford said Thursday the government's plan had the blessing of the province's top doctor and that the "balanced" approach takes mental health and the economy into account.

"It's easy for people to say, 'Just shut everything down' when they're guaranteed a paycheque every single week," he said.

Legault said 1,174 classrooms across the province are currently closed, but most alarming was that 324 of them had been shut in the last two days.

"It remains the last solution, but currently, when one looks at the situation, we should not exclude any solution," he said in Quebec City.

New public health measures were to come into effect Friday in Alberta, where cases, hospitalizations and intensive care admissions continue to climb.

Alberta reported 860 new cases in Thursday's update, along with 225 people in hospital and 51 in intensive care.

"We are at a dangerous juncture in our province," said Premier Jason Kenney.

"The growing number of hospitalizations, ICU admissions are challenging our ability to continue delivering non-urgent health services that Albertans depend on."

Kenney announced indoor group sports and fitness classes in major centres are to be  stopped for two-weeks, along with amateur singing, dancing and theatre groups.

Bars, lounges and pubs must stop serving alcohol by 10 p.m. and close at 11 p.m. in certain hard-hit areas and the government is "strongly recommending" there be no social gatherings in homes.

That province has the biggest per-capita caseload of active infections in Canada and reported nine new deaths on Thursday, matching the record for fatalities set only a day earlier.

Gatherings are now limited to five people, in-person religious services are cancelled and non-essential stores and restaurants can only offer curbside pickup or delivery. Bars, museums and theatres are closed and recreational activities are suspended. Schools remain open.

Kelly O'Leary, co-owner of the Sapphire Hair Lounge in Winnipeg, had hoped salons would be spared restrictions because of the expensive precautions already taken since the spring.

"When the news of the shutdown came, it was definitely a punch in the stomach," she said.

Saskatchewan reported 111 new COVID-19 infections on Thursday, the sixth day in a row the province recorded more than 100 new cases. The provincial government said new public health measures were to be announced Friday.

This report by The Canadian Press was first published on November 12, 2020.