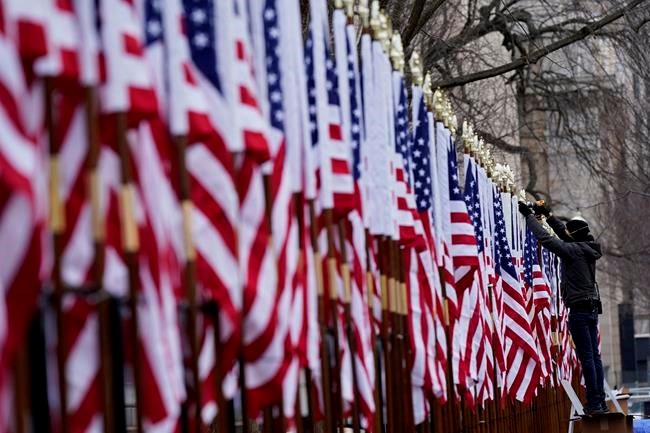 Katie Thompson noticed a pattern emerging with appointments made at her chiropractic clinic for Wednesday afternoon that's usually typical of big sporting events: patients wanted to schedule sessions around the U.S. presidential inauguration.

"We have never experienced this before," said Thompson, who co-owns the Barrie, Ont., clinic with her husband. "It’s clear that as Canadians, we are paying greater attention to the political climate of the United States now more than ever."

The clinic has decided it will livestream the Washington, D.C., ceremony so patients and staff can "watch history be made" as president-elect Joe Biden and vice-president-elect Kamala Harris take office.

The move felt natural for Thompson after months of speaking with patients about their thoughts and fears in the build-up to the November election that saw Democrat Biden win the presidency over Republican President Donald Trump.

"It would be a shame to miss this transition take place," she said.

Canadians have found themselves especially glued to American politics over the last four years since Trump was elected president of the United States.

Trump embraced a combative, populist leadership style and cast doubt on the legitimacy of his own government with frequent scandals that saw him impeached by Congress an unprecedented two times.

Earlier this month, his consistent disputing of the election results culminated with his supporters storming the U.S. Capitol in a deadly riot aimed at blocking the transition of power.

Images from the barricaded streets of Washington this week, showing hordes of fatigue-clad National Guard members taking up position ahead of inauguration day, have raised the stakes of Wednesday's ceremony, stoking anxiety for Americans and concerned observers around the world about potential violence.

He’ll be watching on Wednesday with “a combination of relief and a little bit of anxiety,” especially after the violence of the last few weeks.

He plans to tune in while working from home.

"I'll have one eye on the TV and one eye on my computer screen," he said. “I'll just turn it on and watch and keep my fingers crossed that nothing bad happens."

She’s taken a closer interest in U.S. politics during Trump’s presidency, which she said has laid bare how the political system works – and how it doesn’t.

"It was very mesmerizing, really," she said by phone from her Calgary home.

"I've been watching American politics, not my whole life, but certainly the last few years because there's such an influence in our country, and especially in our province."

She’s observed populism creep into provincial politics in Alberta since Trump took office, especially with the election of United Conservative Premier Jason Kenney in 2019, a leader for whom conflict is also signature part of his brand.

Zieffle said she’s hopeful the U.S. administration change-over can have an impact on politics north of the border.

“I'm very hopeful that will have influence on how Canadian politicians do business,” she said.

Political science and history student Keegan Gingrich, who's studying at Wilfred Laurier University from his home in Waterloo, Ont., also expressed hope that political watchers in Canada can relax once Biden takes office, after years of waking up with anxiety about the international ripple effects from Trump’s latest tweets.

"It might just be boring politics again, which would be kind of nice at this point," Gingrich said.

Gingrich plans to watch a Twitch livestream of the inauguration hosted by U.S.-based gamer Hutch, an online figure who's become more politically engaged in the last few years of Trump’s presidency, streaming live commentary of Trump’s impeachment hearings and the presidential debates.

Gingrich said watching the livestreams and comments from viewers, some of them without much evidence backing up their claims, gives him a sense of the debates and divisions that have defined American politics over the last four years.

“It's kind of fun to watch," he said. "But at the same time it’s terrifying."

This report by The Canadian Press was first published Jan. 19, 2020.