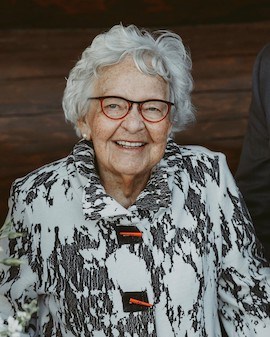 In loving memory of Gladys Christina Martha Beange, 90 years young, who passed away surrounded by the love of many of her family members, Tuesday, July 20th, 2021. Beloved wife of Grant Beange (predeceased), she left behind, Douglas (Joy) Beange, Nancy (Don) Boyer, Christine (Shawn, predeceased) Kirwan, Cyndi Beange, Randy (Sylvie Langlois) Beange, Richard (Beth) Beange, Vickie-Lynne (Larry) Beange-Prince, Sheri-(Lee) (David) Jewell. Predeceased by: Shirley (John) O’Neil, Terry (Klauzina) Beange. She will be greatly missed by her grandchildren; Thairn (Todd), David (Bonnie), Brooke (Yusei), Dawson (Jasmine), Jaya (Glenn), Troy, Tyler, Chloe, Jill (Ray), Seamus, Adam, Megan (Roger), Bryanna (Calvin), Bailie, Avery (Meckenzie), Benjamin, Tessa, Tori (Adam). She will also be sadly missed by her great-grandchildren; Tanner, Dravyn, Jacob, Maija, Holden, Elliot, Gen, Ko, Rowan, Maeve, Leopold, Chi Lok Oaklan, Gavin, and the one on the way. Gladys was born in Burpee, Manitoulin Island to Leonard and Orpha Wright, raised by William and Charlotte Bracken. Beloved sister to: Leone (predeceased Johnny) Dollar, sister-in-law Doris (predeceased Blair) Wright.  Predeceased by: Dalton (Anna) Wright, Norma-Jean Wright, Matthew Wright, Lawrence (Tilly) Bracken, Lyman (Clara) Bracken, Lenora (Norman and Harold) Wright, Ruby (Morley) Hebert, as well as many nieces and nephews. While nurturing her children to become successful adults Mom inspired and instilled in them her strong sense of giving back and service to others. She frequently volunteered at her church, worked at teas and bazaars, helped with Brownies, Girl Guides, Cub Scouts, and helped raise funds for the Women Auxiliary. In her workplace, of 27 years, Gladys organized fashion shows, sat on the Christmas Social Community, and organized reunion lunches for fellow retirees. In her retirement, Gladys continued her community involvement as President of the Nickel Centre Seniors Bowling League and President of the Nickel Centre’s Senior Club where she had initiated numerous innovations, improvements and events. In 2007, she received the Ontario Government Senior’s Award for Volunteers. Due to her self-less, kind and compassionate demeaner, she was honoured in 2010, as a true Woman of Distinction. What we learned from Mom, Gramma and what she would want us to pass on to those that called her G.G.. Where do we start?  Her unconditional love has guided us in ways she didn’t even realize. Her hugs said more than words, it said we could trust ourselves, as we made our way into the world. She gave us that solid foundation. Her strength showed us that standing up is the right thing to do, and excuses don’t work, no matter how many we came up with. Success comes from trying, failing and trying again. Not everything has to be perfect all the time. Kindness counts more than getting ahead and even though time changes, the important things, like family don’t. She always believed that no matter where we are, there’s someone who cares and believes in us. She was our angel on earth. Resting at the Jackson and Barnard Funeral Home, 233 Larch St., Sudbury. (Friends may call 2-4; 6-8pm Friday). Funeral Service in Calvin Presbyterian Church, 1114 Auger Ave., Sudbury on Saturday, July 24, 2021 at 2pm. Facemasks and social distancing are mandatory. Interment in the family plot at the Park Lawn Cemetery. In lieu of flowers, donations to Calvin Presbyterian Church would be appreciated. For donations or messages of condolence, www.lougheedfuneralhomes.com