TORONTO — Community groups and large employers will be enlisted to organize COVID-19 vaccine clinics for residents 18 and older in certain "high risk" neighbourhoods, the Ontario government said Tuesday as it defended its immunization plan.
Apr 13, 2021 5:22 PM By: Canadian Press 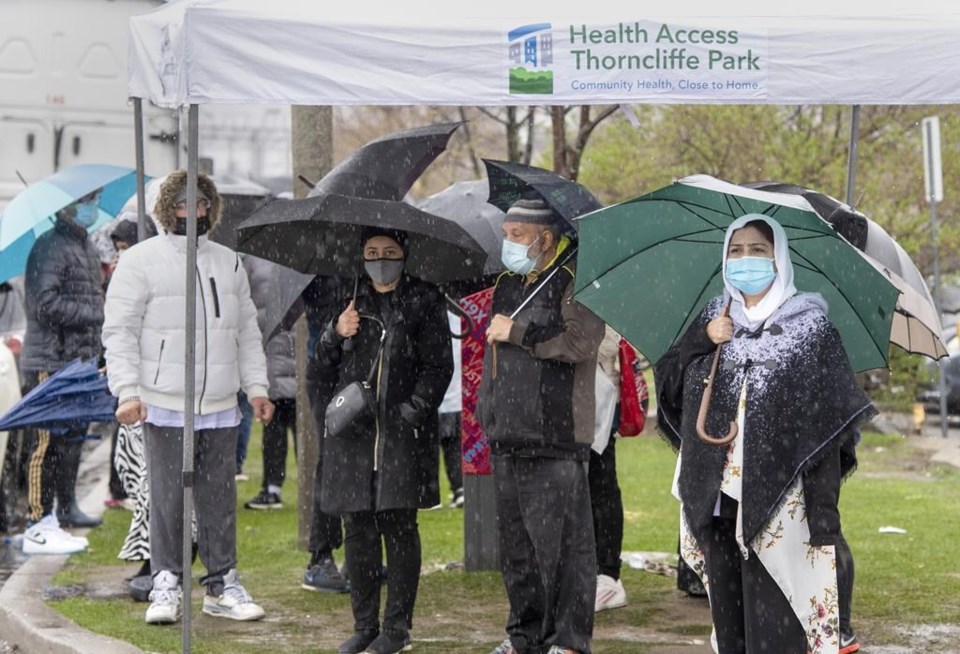 TORONTO — Community groups and large employers will be enlisted to organize COVID-19 vaccine clinics for residents 18 and older in certain "high risk" neighbourhoods, the Ontario government said Tuesday as it defended its immunization plan.

The specifics came days after Premier Doug Ford said all adults in certain priority postal codes would be eligible for a shot – an announcement that went on to spark frustration when residents of those areas couldn't find specifics.

Ford said mobile teams and pop-up clinics run by faith-based groups, community organizations and large employers will be used to get vaccines to residents of 114 hard-hit areas, starting with specific neighbourhoods in Toronto and Peel Region.

"Community outreach will be led by the best people for the job ... these are the people with strong relationships with the surrounding community," he said. "These are the people who can build trust to combat vaccine hesitancy and protect their most vulnerable."

Appointments at those clinics will not be available through the provincial booking portal and the government directed individuals to their local public health unit for details.

The government also said it will ask large employers to fund clinics hosted at their businesses and also offer vaccines to members of the community surrounding their facilities. The province could not immediately say how much the clinics will cost the employers to operate.

The community-driven clinics are in addition to vaccine appointments available through the provincial booking portal to people aged 50 and older living in hot-spot postal codes in Toronto and Peel.

Ford denied that the hot-spot vaccine plan, with its multiple layers, was confusing.

"I think it's shameful that the premier keeps pointing his fingers at Ontarians instead of stepping up and fixing the mess he's made here," she said.

Green party Leader Mike Schreiner accused Ford of "gaslighting" people with his claims the vaccine booking process is simple. "Days after the premier finally announced targeted hot spot vaccinations, people still have no idea how to get a shot," he said. "There is mass confusion — that’s on the Premier, not the individuals."

Ontario also said Tuesday that education workers who work or live in hot-spot postal codes in Toronto and Peel will be provided with an eligibility letter from their local school board to access a shot.

Those workers can schedule appointments through the provincial booking portal starting Tuesday. The government said that will expand to other hot spots, with timing to be determined.

The revised plan, however, does not move child-care workers ahead in the eligibility queue. They remain scheduled to get the shot later this spring.

The province's vaccine effort is progressing as cases of COVID-19 continue to surge.

Ontario set another record Tuesday for patients with the virus in intensive care units – 626 – and reported 1,822 people in hospital because of COVID-19.

It also reported 3,670 new cases of COVID-19 on Tuesday and 15 more deaths linked to the virus.

Elliott said Tuesday that the province continues to explore options to create more capacity in hospitals and find new workers to staff intensive care units, including workers from outside of Ontario.

"With respect to work forces, if there are available teams that would be able to come from particularly the Atlantic provinces, we are certainly looking at that as an option," she said.

Earlier Tuesday, the Children's Hospital of Eastern Ontario said that for the first time in its history it was preparing to accept young adults in its critical care wards because of spiking COVID-19 case counts.

The Hospital for Sick Children in Toronto made a similar move Monday.

Ontario also said Tuesday that two shipments of the Moderna vaccine scheduled to arrive in April have each been delayed by a week.

A total of 3,310,157 vaccine doses have been administered in the province so far.