Friends and relatives of an Ontario Provincial Police officer killed in the line of duty last week remembered him Saturday as a "man of kindness, gentleness and love," who doted on animals and would drop everything to help someone in need. Const.
Nov 28, 2020 3:55 PM By: Canadian Press 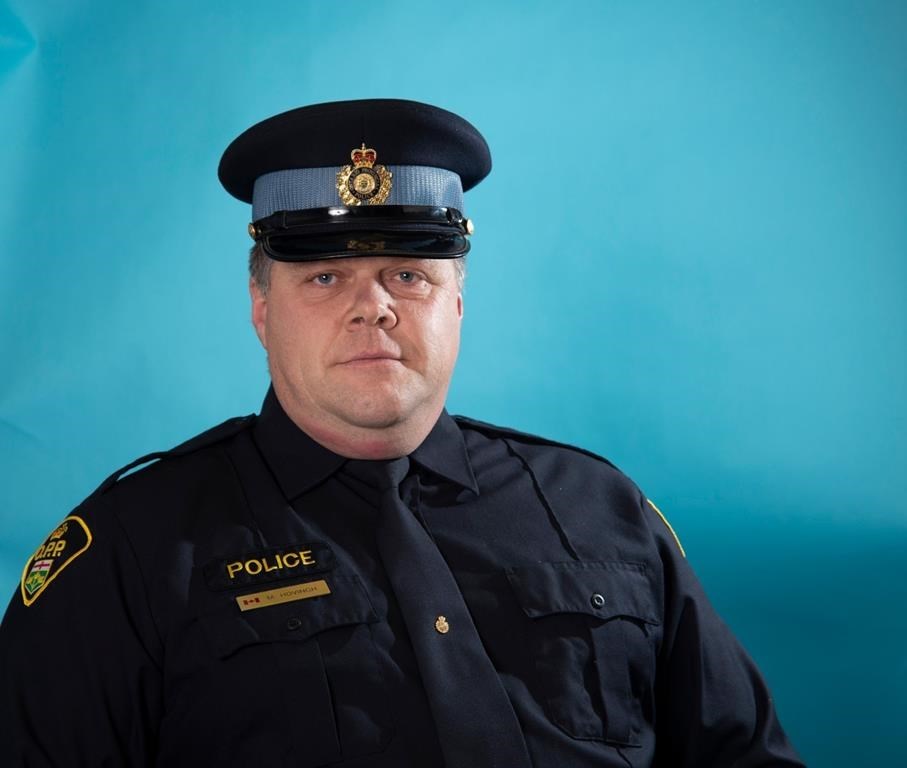 Friends and relatives of an Ontario Provincial Police officer killed in the line of duty last week remembered him Saturday as a "man of kindness, gentleness and love," who doted on animals and would drop everything to help someone in need.

Const. Marc Hovingh also had a unique sense of humour that could spark joy and laughter even in the hardest times, his brother Hans Hovingh said during a small service held in a high school in M’Chigeeng First Nation on Manitoulin Island.

The officer could charm his way out of a dispute with a flash of his "trademark gap-toothed grin," a shrug of his shoulders and a laugh, said another brother, Albert Hovingh.

"When he did this there's no way you could stay angry with him," Albert Hovingh said. "I suspect that's why he got away with a lot of stuff, not only as a child but also later in life."

Marc Hovingh's wife, Lianne Hovingh, described her late husband as her best friend, and recalled hearing how he would sometimes hold off on handing out tickets to drivers who he knew were going through difficult times.

She thanked the public for the "ocean of love and prayers" she and their four children - Laura, Nathan, Elena and Sara - have received since her husband's death.

Masked mourners, many of them in police uniform, gathered Saturday to pay tribute to the fallen officer, who died on Nov. 19 in a shooting that also left a civilian dead in the island community of Gore Bay, Ont.

Hovingh, a 28-year veteran of the force, was one of the officers who responded to a call regarding an "unwanted man'' on a property.

According to the Special Investigations Unit — Ontario's police watchdog — Hovingh and civilian Gary Brohman died in hospital after an exchange of gunfire.

Ontario Premier Doug Ford was among a handful of politicians and dignitaries who attended the service. The Ontario Provincial Police Association said the funeral was otherwise private, with attendance available via livestream. At one point, more than 1,100 viewers tuned in to the ceremony.

An online fundraiser for Hovingh's family had also raised more than $100,000 by mid-afternoon Saturday, with some donations coming in during the funeral.

Provincial police Commissioner Thomas Carrique said the officer's death has left him and others across the force with a "broken heart," and praised Hovingh's "courageous response" to the incident that ultimately claimed his life.

"How is it possible to be so sad but yet so proud at the same time?" he said during the service.

One of Hovingh's colleagues and friends, Const. Marie Ford, described him as someone who cared deeply for his community and always rooted for the underdog, yet shunned the attention he received for his good deeds.

"He didn't need to be promoted and he refused accolades," she said in a tearful tribute.

This report by The Canadian Press was first published Nov. 28., 2020

Settlement reached in lawsuit filed by family of Ottawa man who died following arrest
Jan 26, 2021 8:13 AM