TORONTO — Ontario's COVID-19 situation is "dire," one of the province's top doctors said Thursday as the government considered new restrictions to deal with an alarming rise in cases.
Apr 15, 2021 5:20 PM By: Canadian Press 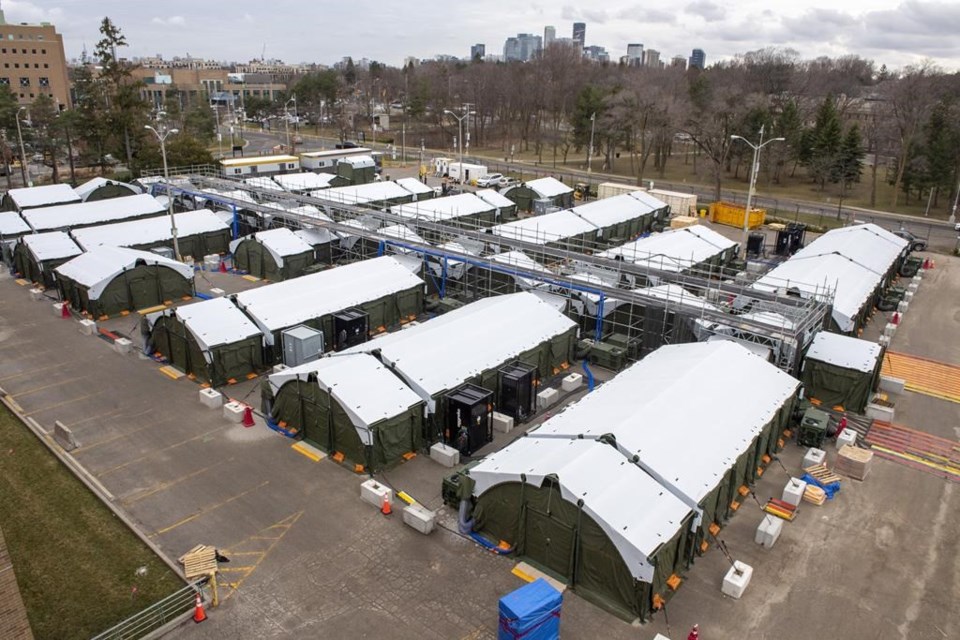 TORONTO — Ontario's COVID-19 situation is "dire," one of the province's top doctors said Thursday as the government considered new restrictions to deal with an alarming rise in cases.

"Unfortunately, our situation is dire," she said.

"At some of the previous press conferences I have referred to the situation as worrisome, and even scary. What is truly scary is that when I used those words before, our rates and our trends were nowhere near where we find ourselves today."

Ontario's seven-day average for daily cases had jumped by 36 per cent in one week – to 4,208, Yaffe said.

The 1,932 people currently hospitalized with COVID-19 and 659 in intensive care are both record highs, she noted, highlighting the immense pressure on the health-care system.

New public health restrictions – on top of Ontario's current stay-at-home order and closure of in-person schooling – will be required and have been recommended to cabinet, Yaffe said.

The measures, which Yaffe did not elaborate on, are based on data gathered by the province's science advisors and take into account efforts that have worked in other jurisdictions, she said.

"Things are not going to get better if we don't change," Yaffe said. "Things will, in fact, get worse. So, that's the bottom line."

Solicitor General Sylvia Jones would not say, however, what measures were being considered or if a curfew – similar to the one enforced in Montreal – would be among them.

"Premier Ford has said from the very beginning of this pandemic, that all options are on the table," Jones said. "And that continues to be our philosophy as a cabinet and a caucus."

Jones, however, acknowledged the challenges a curfew would present in Ontario, pointing to anti-curfew protests in Quebec.

"I think the Montreal riots speak to the challenge of both enforcing, and people's willingness to do a curfew," she said.

The Canadian Civil Liberties Association said a curfew would not help the public health crisis, and urged the government not to go down that road.

"Imposing a curfew is an admission that the government has run out of ideas," said Cara Zwibel, director of fundamental freedoms at the CCLA. "It is an unnecessary and disproportionate measure that is likely to do more harm than good."

NDP Leader Andrea Horwath slammed the government for imposing public health measures too slowly in recent weeks, which she said has led Ontario to the current situation.

"This government has really dropped the ball here," she said. "I don't know how they pick it up at this point. But let's hope they do."

Hospitals have been ramping down non-essential and non-urgent medical procedures this week to ensure they have the capacity to care for COVID-19 patients as infections keep rising.

Mackenzie Health, a hospital group in York Region north of Toronto, issued an appeal to physicians who both work at its facilities and in the community to help care for critically ill COVID-19 patients.

The hospital said the pandemic's third wave has put an "unprecedented strain" on the health-care system.

"We continue to do everything we can to prepare for a continued surge in COVID-19 cases to protect our patients and community," it said in a statement.

The government also said a COVID-19 field hospital could be activated in Toronto later this month to help deal with an influx of patients.

The Ministry of Health said the mobile health unit at Sunnybrook Hospital, set up in the facility's parking lot, is expecting to take patients in the coming weeks. It is one of two field hospitals in the province designed to help address growing capacity challenges.

Meanwhile, the Grey Bruce Health Unit told residents to stay home for the next two days as COVID-19 variants of concern surge in the region.

Public health authorities said all residents should consider themselves a COVID-19 carrier for the next 48 hours. Authorities said the steps are necessary after 70 new cases were confirmed in the region in the past 36 hours.

The public health unit said it needs to slow the spread of the virus in order to do contact tracing. It is also shutting down the Grey Bruce Health Unit info-line and cancelling a mass vaccination clinic on Saturday to redeploy staff to case management and contact tracing.

The province said 105,430 doses of a COVID-19 vaccine were administered since Wednesday's update, bringing the total number of vaccinations to 3,528,404.

- with files from John Chidley-Hill.

This report by The Canadian Press was first published April 15, 2021.