TORONTO — The recent approval of new vaccines will accelerate Ontario's immunization plan, the province said Friday as the man in charge of the rollout expressed optimism all adults could receive the first dose by June 20.
Mar 5, 2021 5:10 PM By: Canadian Press 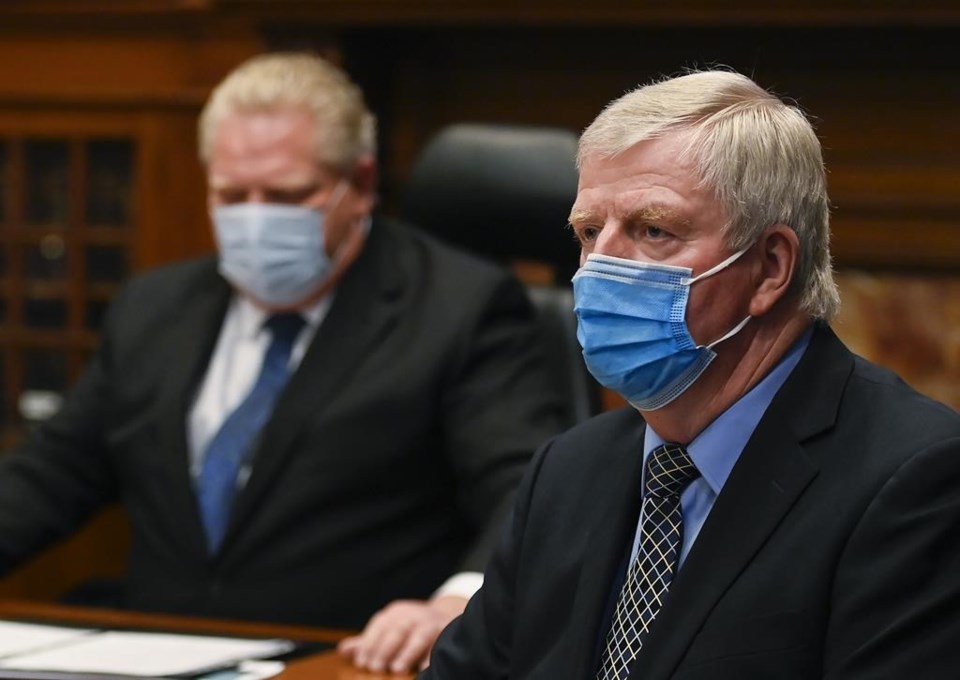 TORONTO — The recent approval of new vaccines will accelerate Ontario's immunization plan, the province said Friday as the man in charge of the rollout expressed optimism all adults could receive the first dose by June 20.

The government said under the current plan, seniors aged 75 and older will start getting the shot in April, while everyone 60 and older will receive the first dose by the end of May or early June, if not earlier.

Officials made the announcement after Health Canada approved a Johnson & Johnson COVID-19 vaccine.

"We've had a seismic shift in our vaccination opportunities and the program to roll it out," said retired general Rick Hillier, the head of the province’s vaccine task force.

A spokeswoman for Health Minister Christine Elliott said the timelines would depend on supply.

"If we receive more vaccines than currently planned for — as will likely be the case with today’s approval of Johnson & Johnson and increased shipments of Pfizer — we will be able to further accelerate these timelines," Alexandra Hilkene said in an email.

She said Hillier's comments about the June 20 timeline were a goal based on the Johnson & Johnson approval.

Hillier said the approval of two more vaccines, expected increases in supply and the extension of the interval between first and second doses will allow the province to "crush those timelines really tightly."

"... our aim would be to allow the province of Ontario to have a first needle in the arm of every eligible person who wants it by the first day of summer," Hillier said. "Please be patient a little while longer."

The province says 113 mass vaccination clinics will start operating this month, with maximum capacity of four million doses per day across public health units, though officials administration will vary based on supply and local considerations.

The vast majority of deaths from COVID-19 in Ontario, and across the country, have been among people aged 60 and older.

Other risk factors including neighbourhood, existing health conditions and inability to work from home will be prioritized in the second phase of the rollout.

A recent report from experts advising Ontario on COVID-19 said a vaccination plan based on age and neighbourhoods hit hardest by the virus could reduce cases by the thousands and prevent deaths.

Doses will also be offered starting in April to people with specific health conditions like transplant recipients, and to residents and staff in congregate care settings including correctional facilities, shelters and developmental facilities.

People with other high-risk conditions including obesity, treatment that suppresses the immune system, and intellectual disabilities will follow the first group, and then people considered at greater risk that include dementia, cancer and diabetes.

Essential workers who can't work from home will be offered doses at the end of the second phase, though the timeline is subject to change.

The province laid out more details on which essential workers will be eligible to receive their shots first. Vaccinations among that group will start with school staff, first responders, childcare workers, food manufacturing workers and agriculture workers.

The union representing correctional workers applauded the news on that members would be included in the second phase of vaccinations.

“This is absolutely the right thing to do, and the government deserves credit for ensuring our Corrections members get vaccinated,” Ontario Public Service Employees Union President Warren Thomas said in a statement. “This will go a long way to making our correctional facilities safe, protecting both staff and inmates."

Hillier said the single-dose Johnson & Johnson vaccine may be useful in getting shots to people who are difficult to reach, such as migrant farm workers and homeless individuals.

Ontario is expecting 194,500 doses of the newly approved Oxford-AstraZeneca vaccine next week. Those shots will be administered to residents between the ages of 60 and 64 starting with a pilot project in Toronto, Kingston and Windsor-Essex pharmacies.

Officials said the timeline for younger individuals may speed up based on supply of that vaccine.

Others criticized the timeline for the rollout as still too slow.

NDP Leader Andrea Horwath said an April start date for at-risk residents prioritized in the second phase of the rollout is too late.

"Where’s the urgency? These folks are at grave risk right now, and getting them their shots is critical to stopping the spread,"

This report by The Canadian Press was first published March 5, 2021.