TORONTO — Ontario has expanded the first phase of its COVID-19 vaccination drive to include residents experiencing homelessness, its largest municipality announced on Sunday as the province eclipsed 300,000 total infections since the onset of the glo
Feb 28, 2021 6:05 PM By: Canadian Press 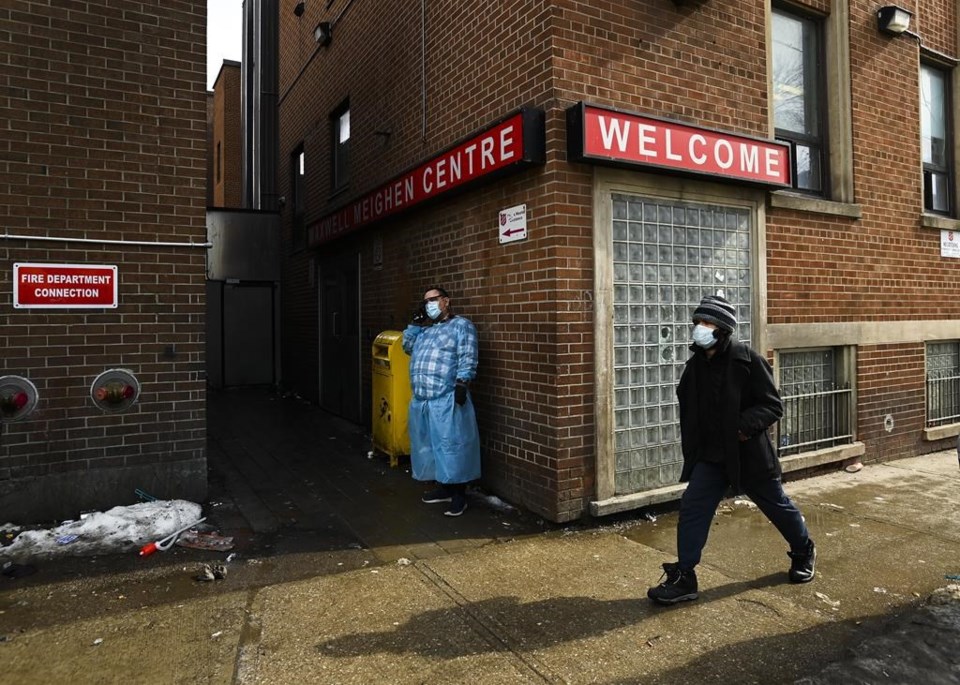 TORONTO — Ontario has expanded the first phase of its COVID-19 vaccination drive to include residents experiencing  homelessness, its largest municipality announced on Sunday as the province eclipsed 300,000 total infections since the onset of the global pandemic.

The city of Toronto said it received word over the weekend that the province had added homeless people to the list of those who qualify for a jab under Phase 1 of its vaccine rollout plan.

Shelter-system residents will accordingly start receiving their initial vaccine doses this week, the city said in a release.

"People experiencing homelessness are at elevated risk of serious health impacts due to COVID-19 and are vulnerable to transmission in congregate settings," Toronto Board of Health Chair and city Coun. Joe Cressy said in the statement. "By updating their vaccination prioritization plan, the province has made it possible for the city and our hospital and health care partners to help keep those most at risk in our communities safe."

Ontario's ministry of health had previously stated that homeless residents would not be eligible for a vaccine until the inoculation drive entered its second phase. The city did not provide a timeline for when the provincial guidance changed, and the ministry did not immediately respond to request for comment on Sunday.

Toronto said local health officials and its shelter support and housing administration would identify shelters at the highest risk of contracting the virus, but did not spell out their criteria.

Advocates had been pushing for homeless residents to move up the vaccine queue for weeks, citing their significantly higher rates of mental and health afflictions relative to  the general public as well as difficulties they face in observing basic public health protocols in an overtaxed shelter system.

A major difference, Bond said, is that unlike the "captive audience" of a long-term care home, those living in shelters leave every day to get food, see doctors and other health-care professionals.

The presence of new COVID-19 variants of concern in the city, he said, only compounds the issue.

"As people come and go from the shelter into the community, the variant will propagate into the wider community, if it hasn't already," Bond said.

The original plan from the province saw shelter workers to be vaccinated in the first phase while shelter residents were slated for Phase 2.

"It makes absolutely no sense, and I'm not being facetious, it just literally makes no sense to me," Bond said of the original inoculation timeline. "The only effective way to control outbreaks is to vaccinate simultaneously all of those individuals in the shelter system, whether they work or live there."

A COVID-19 variant believed to be one first identified in the United Kingdom has also highlighted the challenges the homeless face when needing to self-isolate.

One outbreak linked to the variant has ripped through the Maxwell Meighen Centre in downtown Toronto, with at least 31 people being infected.

A man who lives at the facility said proper isolation inside the shelter is impossible due to regular intermingling and shared bathrooms.

The man, who did not want to be identified for fear of recriminations from staff, said everyone staying at the centre has to leave their rooms from 8 a.m. until noon.

The Salvation Army, which operates Maxwell  Meighan, said people do have to leave the shelter during those hours so their rooms can be cleaned.

The situation is not unique to one facility, according to one social worker.

"Every shelter I've called has told me that they're on outbreak status and they're closed to new admissions," Sarah Ovens said. "There is nowhere to go where they will feel safe and be able to actually isolate, both to keep themselves safe and to keep other people safe."

The move to vaccinate the homeless comes after Ontario reported 1,062 new infections and 20 more deaths linked to the virus on Sunday.

Those figures pushed the province's overall virus case count to 300,816 infections over the course of the pandemic, making it the highest in the country. The province is also poised to record 7,000 deaths since the onset of the pandemic, with 6,980 recorded as of Sunday.

Hospitalizations in the province declined by 53 to 627, with 289 patients in intensive care and 185 on a ventilator.

The figures come a day before several public health units in the province are set to change status.

Seven are set to relax protective public health measures, while Thunder Bay and Muskoka Simcoe are set to move into the lockdown stage of the provincial pandemic response plan amid rising case numbers.

This report by The Canadian Press was first published Feb. 28, 2021.