MONTREAL — Quebec regions that have seen sharp increases in COVID-19 cases in recent days will remain at a pre-alert level as health officials decide on next steps, authorities said Thursday.
Sep 17, 2020 4:45 PM By: Canadian Press 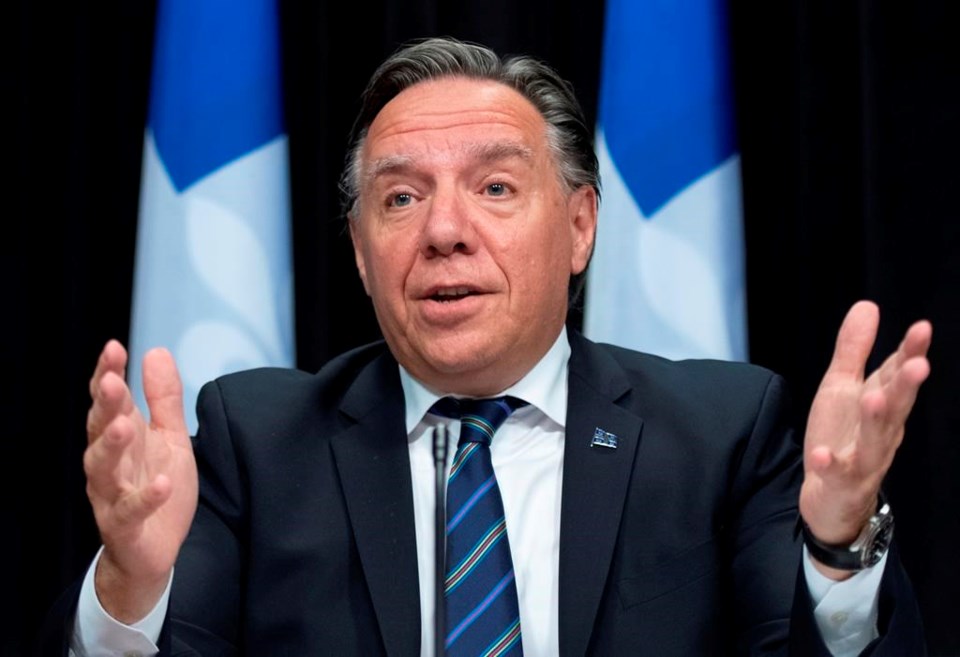 MONTREAL — Quebec regions that have seen sharp increases in COVID-19 cases in recent days will remain at a pre-alert level as health officials decide on next steps, authorities said Thursday.

In the meantime, Health Minister Christian Dube implored people in those regions — which make up 75 per cent of the province's population — to show restraint over the weekend to help get cases under control.

"You still have the power to ensure that your region doesn't turn to orange," Dube said, referring to the province's colour-coded alert system. "This is not the time to take advantage of the weekend to have parties and gatherings without respecting the measures."

Eight regions are considered to be at the pre-alert yellow level. None has yet been declared orange, which comes with unspecified stricter measures. Dube did let slip that the province will follow Ontario's lead and announce on Friday increased fines for people violating rules on gatherings.

Earlier, Premier Francois Legault said the province is studying how to use police to break up large private parties that are being blamed for the recent spread of the disease.

Police aren't permitted to enter a home uninvited without a warrant.

"So, we have to be careful," Legault said. "It's a private property but, at the same time, if somebody is doing a big party with 50 people, which may have an impact on the public safety of the population, I think we have to, at least, look at what we can do for that."

But opposition parties opposed the idea of having police go inside private homes.

Liberal Leader Dominique Anglade called it a radical measure. Instead, the government should strive for transparency and explaining the rules to people, she said.

"I think before the government goes ahead, they really need to explain what is the situation, how critical it is and why they would decide to go down this path," Anglade said.

Aside from possible police intervention, the Quebec government is hoping a new advertising campaign with testimonials from people who've had COVID-19 or lost someone to it will persuade skeptics who question the disease's seriousness.

The ads were announced as the province reported an additional 499 COVID-19 cases Thursday, including 248 previously unreported cases in Montreal that date back to Sept. 9-14.

Legault said he requested the tougher advertising campaign to get the public health message across to "people who still think that there is no danger." He said skepticism surrounding COVID-19 dissipates for people who know someone who has had the disease.

Quebec recorded 251 new cases of COVID-19 and two deaths in the past 24 hours.

The number of hospitalizations increased by six to 136, of which 29 were in intensive care — an increase of three.

Health authorities in Montreal said Thursday that a private Jewish school has shifted to online classes for the next two weeks due to an outbreak.

Dr. Mylene Drouin, Montreal's public health director, said the decision was made due to 15 cases at Herzliah High School, including eight from one class.

Drouin says that because the school was already offering online courses, public health decided it would be prudent to shut the school down for two weeks.

The woman did not know she had COVID-19, and while Dube corrected the record in the hours after a news conference Tuesday, he publicly apologized to her on Thursday.

The woman has told various media she suffered a backlash following Dube's comments.

This report by The Canadian Press was first published Sept. 17, 2020.

Police say fourth gun at scene where year-old boy shot dead, man and officer injured
Nov 27, 2020 4:04 PM
Another man charged with second-degree in death of former NHL star's son Brock Beck
Nov 27, 2020 3:39 PM
Comments
We welcome your feedback and encourage you to share your thoughts. We ask that you be respectful of others and their points of view, refrain from personal attacks and stay on topic. To learn about our commenting policies and how we moderate, please read our Community Guidelines.