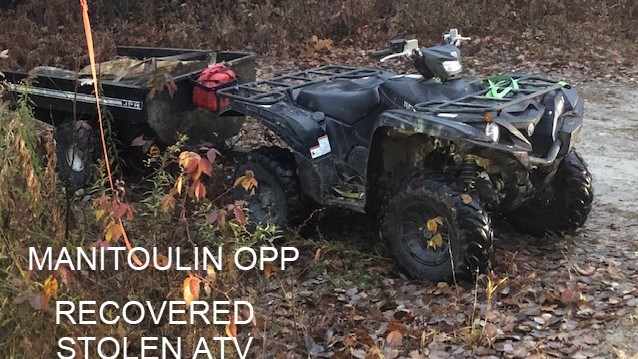 Provincial police recovered a stolen ATV with wood in a trailer and charged two people with theft. (Supplied)

Two people have been charged with theft after they were caught with wood they allegedly stole from a property on West Branch Road in Webbwood.

Provincial police said they received a call on Oct. 20 regarding a theft of lumber from that property.

Officers learned two people were seen at the property, one with a motor vehicle, and the other with an all-terrain vehicle with an attached trailer loaded with lumber.

Police searched for and found the motor vehicle in question parked off West Branch Road with the occupants inside. The ATV and trailer were also found in the area and were confirmed as stolen.

As a result of the investigation, a 37-years-old Sudbury man was arrested and charged with theft under $5,000 and possession of property obtained by crime.

A 36-year-old Markstay-Warren woman was also arrested and charged with theft under $5,000 and possession of property obtained by crime.

Both were released on an undertaking and are scheduled to appear at the Ontario Court of Justice on Dec. 14 in Espanola.