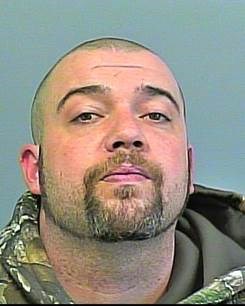 Greater Sudbury Police are seeking the assistance of the public to locate 34-year-old Ty Thrush in connection to numerous robberies that occurred between Nov. 7 and Nov. 15. (GSPS)

Greater Sudbury Police are seeking the assistance of the public to locate 34-year-old Ty Thrush in connection to numerous robberies that occurred between Nov. 7 and Nov. 15.

Two of the robberies took place back-to-back on Notre Dame Avenue on Nov. 14.

Just before 10 p.m. on Nov. 14, GSPS received a call that a robbery had just taken place at a restaurant on Notre Dame Avenue in Greater Sudbury. Information provided was that a man had entered the establishment, demanded money from the staff while displaying an edged weapon.

The man stole an unknown amount of cash and then fled the area on foot prior to police arrival.

Police arrived on scene minutes later, where they then reviewed video surveillance and set up containment until the K9 Unit arrived. Police searched the area with help from Tactical Officers and the K9 Unit, however they were unable to locate the man.

A short time later, Police were dispatched another restaurant on Notre Dame Avenue in regards to another Robbery that had just occurred.

Members of our Break Enter and Robbery (B.E.A.R.) Unit identified the man believed to be responsible as 34-year-old, Ty Thrush.

Due to the violent behaviour of this man and the escalating number of incidents, Detectives applied for and have been granted an arrest warrant for Ty Thrush for six counts of robbery (six counts) and six counts of disguise with intent.

Anyone with information related to his whereabouts is asked to contact the GSPS Criminal Investigation Division.

Anyone with information is asked to contact Police at 705-675-9171 or Crime Stoppers at 705-222-TIPS, online at www.sudburycrimestoppers.com.