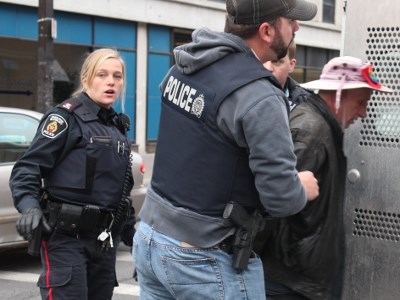 Greater Sudbury Police place an anti-poverty demonstrator in the back of a police van this afternoon. At least nine demonstrators were arrested after refusing to leave Sudbury MPP Rick Bartolucci's office today. Photo by Heidi Ulrichsen

That's because the province has decided it will provide $42 million in transition funds to maintain the Community Startup and Maintenance Benefit for this year, although the full cut will go ahead next year.

In the past, the program gave $1,500 every two years to families facing eviction, in danger of having their utilities cut off or fleeing domestic violence, among other uses.

While previously administered by the province, the program will now be run by municipalities.

“We certainly feel the injection of $42 million back into providing assistance for people is an important but limited victory,” said Gary Kinsman, one of S-CAP's leaders and a Laurentian University sociology professor.

On Nov. 9, S-CAP members set up an “emergency homeless shelter” inside Sudbury MPP Rick Bartolucci's office to protest the benefit cuts. Several of the protesters, including Kinsman, were arrested at the scene and charged with trespassing.

The group facing charges, who have dubbed themselves the S-CAP 11, made another brief court appearance Jan. 21.

During the hearing, the Crown and defence lawyers agreed to set a date for a pre-trial meeting, which will likely take place some time in February.

Kinsman said the protest “played an important part” in helping to restore the funding as it helped to galvanize a provincewide fight against the cut.

He said his group will now look into how the community startup benefit will be administered.

S-CAP has been assured by Greater Sudbury's director of social services, Luisa Vale, that the application process for the benefit will be the same, and the amounts are consistent, Kinsman said.

“We'll be starting to take cases to the city, and we'll be able to report back shortly on how that is going,” he said.

S-CAP will also continue to demand that the province fully restore funding for the community startup benefit, as well as for a major raise in social assistance rates, Kinsman said.

We'll be starting to take cases to the city, and we'll be able to report back shortly on how that is going.

As part of their activism, the group will participate in a protest in Toronto on Jan. 26 at the Ontario Liberal Leadership Convention, Kinsman said. There is a free bus organized by the Canadian Union of Public Employees.

S-CAP is also hosting a meeting about the Community Startup and Maintenance Benefit on Feb. 5.

The event, which takes place in the second-floor gym of St. Andrew's Place at 111 Larch St., starts at 6 p.m. with a free meal followed by a community meeting at 7 p.m.

For more information, contact the Sudbury Coalition Against Poverty at sudburycap@gmail.com or 249-878-7227.