Sentencing brings some closure to victims of priest's abuse

Four grown men, with tears streaming down their faces, stood up in a courtroom and told their stories of lifelong pain, feelings of shame and loneliness.
Nov 10, 2009 5:27 PM By: Laurel Myers 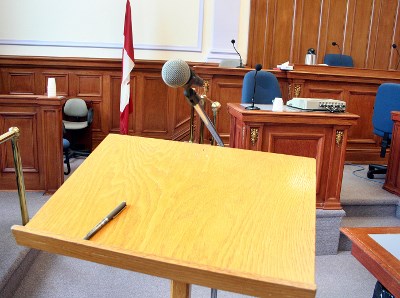 Roman Catholic Priest Bernard Cloutier was sentenced to five years in jail for his actions while serving as priest to parishes in Sudbury, Chelmsford, and Espanola. File photo.

Four grown men, with tears streaming down their faces, stood up in a courtroom and told their stories of lifelong pain, feelings of shame and loneliness.

More than a quarter of a century ago, the four men, between 12 and 17 years of age at the time, each served as an altar boy at their local Catholic church, under the guidance of Father Bernard Cloutier.

On Monday, the 68-year-old parish priest stood before a Sudbury court and was handed down a five-year prison sentence after being convicted of four counts each of indecent assault and gross indecency, as well as two counts of sexual assault, against the four victims. The events were alleged to have taken place over a period of nine years, while Cloutier was a parish priest in Sudbury, Chelmsford and Espanola.

Throughout the day-long sentencing hearing, Cloutier sat still behind his lawyer, his eyes not straying from the floor in front of him, except when one of his victims turned to address him directly after reading his victim impact statement to the court.

“Bernie, I trusted you and my family trusted you, and you betrayed us,” said one of the victims, who cannot be named, with his wife standing tight at his side. “Today, I forgive you for the sin you committed against me and I want you to pray every day to my father and ask his forgiveness for what you did.”

While Cloutier momentarily raised his eyes from the ground and turned slighlty toward the man, he never actually made eye contact with him.

Following the sentencing, assistant Crown attorney Diana Fuller said there were feelings of both disappointment and relief amongst the victims and their families.

“I think naturally they were disappointed that Cloutier refused to take responsibility and to apologize, because ... they feel a sense of guilt and blame, which is so unfair,” she said. “Had Father Cloutier apologized to them and taken responsibility, that would have helped to allow them to move on.”

However, the priest's conviction and subsequent sentencing also brought with it an enormous sense of relief.

“We're making it loud and clear that they were innocent victims in all of this and they were very courageous in being able to come forward and stand up to him, stand up to the church and stand up to people who don't want to know that this kind of thing happened,” Fuller said.

While the victims were not required to read their victim impact statements before the courts, three of the men and two of their wives read their statements aloud.

“(Those statements) expressed the haunting effects of the abuse, the way the abuse tormented them for decades. I think they wanted Father Cloutier to hear from their own mouths, just what he had done to them.”

While the defence argued for a two-year prison sentence for the priest, the crown suggested eight years. However, she said five years was a fair decision.

“I think the sentence reflects denunciation and public deterrence,” she said. “The public and society has to know that if you are in a position of trust — and if you're a priest, that trust is almost absolute — and you breach that trust, and you betray and exploit your position and those people who believe in you, you will be harshly punished.

“Churches and schools and hospitals are public institutions that we all have to invest our trust in for them to function properly. If we can't trust them, those professionals won't be able to do their job,” she continued. “We protect our social institutions when we send a clear message for people who abuse positions of trust that the penalty will be severe.”

She said Justice Paul Kane took Cloutier's age into consideration when determining the sentence, as well as his contributions to society since the abuse took place.

“In the time from 1983 to now, he has apparently been a parish priest who has done a lot of good work and is much admired by his parishioners,” she said.

According to Fuller, Cloutier's lawyer has already filed an appeal of the decision with the Ontario Court of Appeal.