'We will find you': cyber crime unit

Over the past couple weeks, the Greater Sudbury Police Service (GSPS) has identified, located and arrested three local men who have been allegedly involved in child pornography.
Feb 3, 2012 9:36 PM By: Laurel Myers 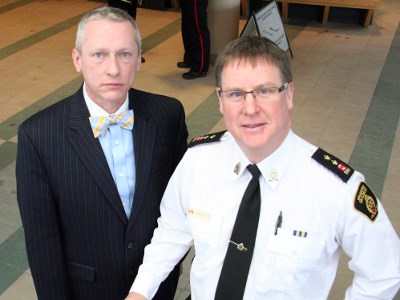 Greater Sudbury Police Service d/sgt Tim Burtt and Insp. Todd Zimmerman shared information about a province-wide child pornography investigation, the results of which were announced earlier this week, at a press conference at police headquarters Friday morning. Three Sudbury men were arrested as part of the investigation. Photo by Laurel Myers.
Over the past couple weeks, the Greater Sudbury Police Service (GSPS) has identified, located and arrested three local men who have been allegedly involved in child pornography.

The arrests were made as part of a provincewide strategy designed to protect children from sexual abuse and exploitation on the Internet. The sweep was led by the Ontario Provincial Police and including 18 police services, the Ministry of Community Safety and Correctional Services, and the Ministry of the Attorney General.

Through the investigation, police executed a total of 76 search warrants, resulting in 213 charges against 60 men, including three young offenders. Charges include sexual assault and child luring, as well as, making, making available, distribution of, and accessing child pornography.

“This is the biggest wrap-up that has happened to date,” GSPS Insp. Todd Zimmerman said at a press conference Feb. 3. “We will continue to investigate incidents in our community and I anticipate ... there will be further charges.”

All three Sudbury men, aged 35, 42 and 47, have attended their individual bail hearings, and their court dates are set for early this month, according to GSPS media officer Const. Meghan O'Malley.

“For the Greater Sudbury Police Service's role, we have conducted 836 investigations, (made) 65 arrests and (laid) 295 charges,” Zimmerman said.

But it's not enough.

“Unfortunately, in this area, our statistics continue to raise,” the inspector said. “We find this a very serious situation in our community ... and we will actively continue to investigate these matters.

“Hopefully, the community and the public will get the message that this is something that's not tolerated and hopefully we can reduce these numbers,” he added. “We are doing our (best) by increasing investigative responsibilities, but the message has to get out there that this is inappropriate.”

Not only does the provincial strategy facilitate a co-ordinated approach to the investigation with police services across Ontario, it also addresses the “complete picture” of child sexual abuse and exploitation — from the outset of an investigation, to offender apprehension and management, effective prosecution and sentencing, victim identification and support, as well as prevention and awareness.

“Part of our role is to go out and find those that are going to prey upon the part of society that concerns us, our children,” he said.

“The success story of this initiative is 22 victims that are not being victimized because, across the province, we were able to identify them and rescue them from the situation they were in,” Burtt said.

“We keep saying the same thing to individuals: If you're out there and you're exploiting our children on the Internet, we will find you. You can expect a knock on your door.”

Burtt said a number of the cases arise from the use of social media sites, such as Facebook, and chat programs.

“These individuals have taken something wonderful — the Internet — that we use for educational purposes, to communicate, and they've taken it to go out and exploit our children,” he said. “It's a concern because they can sit in the anonymity of their home and have the children commit these acts.

“Unfortunately, the kids don't think anything of it and the next thing you know, their images are out there on the Internet.”

And once the photos have hit the Internet, Burtt said it's near impossible to ever get them back.

“It's hard because it gets traded amongst these individuals. This is a precious commodity amongst the people who exploit the children.”

- With files from Arron Pickard.

Killarney man’s death in firearms incident under investigation by police, coroner
Oct 29, 2020 9:16 AM