Battling from behind, Wolves fall to a 4-1 final 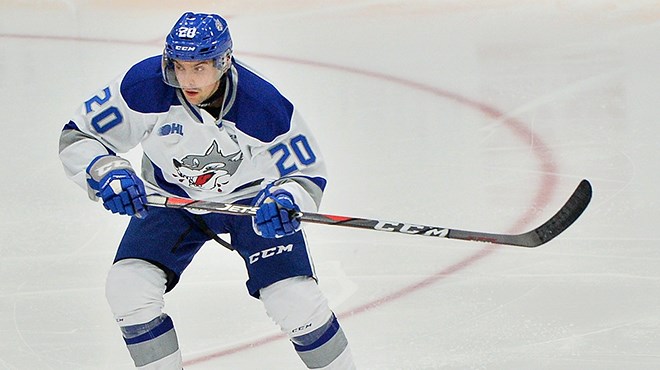 Sudbury Wolves' Shane Bulitka delivers the team's one and only goal in their Oct. 19 match up against the Owen Sound Attack. (File)

Flying high from a big win on home ice, the Sudbury Wolves headed west to Grey County on Saturday to face off against the Owen Sound Attack.

Swept up in an early game lead, the Sudbury Wolves spent the majority of the game battling from behind, which succeeded at getting the Pack on the scoreboard but was not enough to seal the win. The game ended in a 4-1 final for the Attack.

It took some time for the ice to heat up Saturday, but this would prove to be the calm before the storm. Owen Sound rookie Ethan Burroughs opened the scoring at 12:57 into the first period, with assistance from teammate Carter Roberston.

Despite several shots by league-leading players, the Wolves couldn't beat Guzda standing tall between the pipes. The Pack moved into the second period down one, with shots on goal 9-7 in favour of Owen Sound.

The Wolves came out swinging in the second period, earning themselves 10 minutes in penalties for slashing, tripping, interference, and checking from behind. In contrast, the Owen Sound Attack suffered six minutes of penalty time in the period for tripping, roughing, and slashing.

In the heat of the action, Owen Sound built their lead off a goal by former North Bay Battalion Adam McMaster, with help from Daylon Groulx and Aidan Dudas. The Wolves took their place on the scoreboard seven minutes later at 19:24, with Shane Bulitka's sixth goal of the season.

He was assisted in the play by teammates Quinton Byfield and rookie Kalle Loponen. Shots on goal in the period were an even 9-9.

Sudbury kept their gloves on in the third period for the most part, but despite focusing their attention back on the net, they couldn't turn things around. After a flurry of action around the net, Owen Sound's Andrew Perrott scored his first goal of the season, extending his team's lead by two to 3-1.

Attack's Matthew Philip sealed the deal with less than two minutes remaining in play, scoring his fourth goal of the season on the Wolves' with assistance by Barret Kirwin and Perrott. Shots on goal in the period were 9-8 in favour of Owen Sound.

The game ended 4-1 for the Owen Sound Attack, with final shots on goal in their favour 27-24.

With this loss, the Pack falls to fourth overall, but remains second in the Eastern Conference and first in the Central Division.

In just a few hours the Wolves will be taking the ice at the Sleeman Centre to face the Guelph Storm for a 2 p.m. puck drop. Check back with Sudbury.com tomorrow for the full game report.

Silver Stick second chance leads to semi-final berth for Coyotes
Feb 27, 2020 7:00 PM
Comments
We welcome your feedback and encourage you to share your thoughts on this story. We ask that you be respectful of others and their points of view, refrain from personal attacks and stay on topic. To learn about our commenting policies and how we moderate, please read our Community Guidelines.