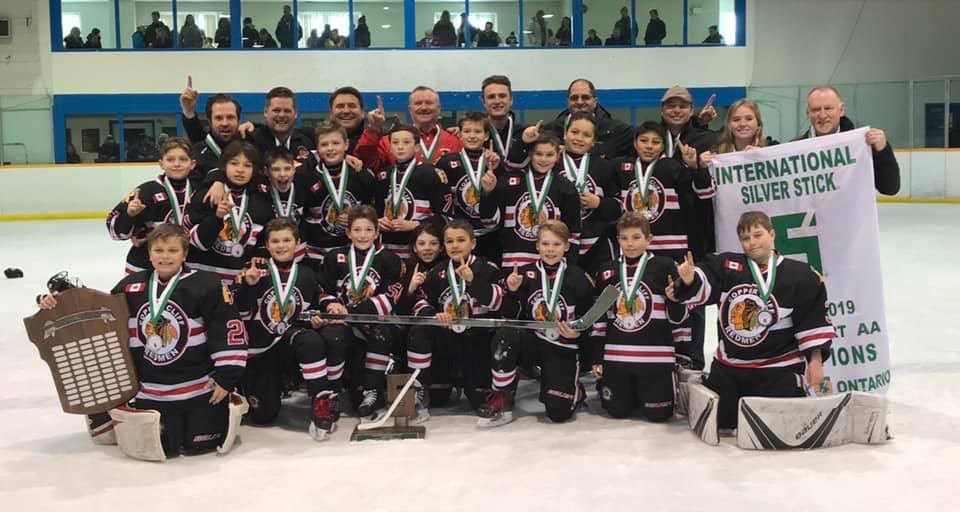 A 3-0 shutout of the Leaside Flames in the championship final of the Atom "AA" International Silver Stick in Sarnia this past weekend would bring the number of local teams who have claimed the honour in this particular age and category bracket to three.

With this latest tournament win, the Redmen have joined the 1987-88 Copper Cliff Redmen, as well as the 2011-2012 Nickel City Rebels, from a listing of teams that dates back to the early 1970's.

Quite interesting is the fact that it could easily be argued that the toughest hurdle to overcome on their journey to this crown was right in their onw backyard, the Redmen forced to overtime by an equally talented Nickel City Major Atom "AA" Jr Sons team in play at Regionals in December.

Once safely through regionals, the Copper Cliff lads blasted their way through round robin play at the next level, defeating the PAL (Pride in Athletics for Life) Knights from Long Island, NY (8-3), the Port Huron Flags (5-0), and the St. Peter's Spirit from St Louis (6-4).

Quarter-final play on Saturday evening would see the Redmen double the Whitby Wildcats 4-2, earning a berth in the final four on Sunday. The locals disposed of the St Louis Rockets with ease (5-1), before reaching the pinnacle by dousing the Flames.

Kohyn Eshkawkogan, Ryder Coe and Ashton Pitawanakwat found the back of the net for the Redmen in the gold medal encounter, with Desmond Whitmore keeping things clean at the other end of the ice.

In addition, not only was Khade Metatawabin named to the tournament all-star team, but the entire Redmen crew were singled out for their sportsmanship and character, with each player receiving MVP water bottles from event organizers.

The Copper Cliff crew will now begin to ramp up their play, with what is expected to be an ultra-competitive NOHA Tournament of Champions scheduled in Sudbury for the weekend of March 8-10.