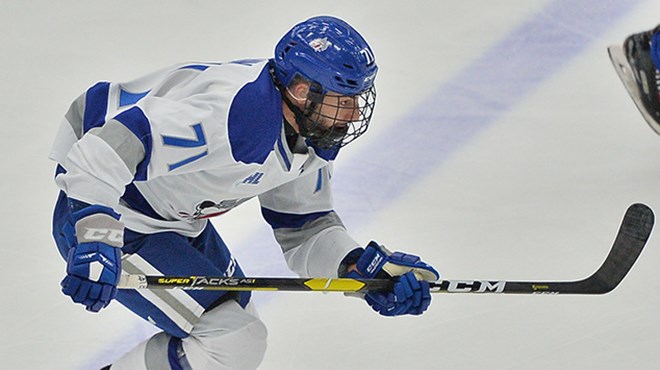 The Sudbury Wolves wasted no time staking their claim on the scoreboard in Sault Ste. Marie Saturday, setting up an early game lead with four shots by four different players that would ultimately lead the Pack to victory.

Defending that lead was Sudbury newcomer Christian Purboo, who managed to stop 28 out of 31 shots on net over the three-period matchup.

Wolves' David Levin was named first star in the match against the Greyhounds, scoring one of three shots on net and two assists. He was followed in the ranking by third star Owen Gilhula, who earned two points for Saturday's performance with one goal and one assist.

The first period got off to an exciting start, with Wolves' Gilhula and Nolan Hutcheson attacking the net shot for shot, for Gilhula to earn his fourth goal of the season off an assist by his teammate. After working through several penalties served by their hosts, Sudbury's Owen Robinson took advantage of a power play to score his first of the season at 6:38 with assistance by Phil Caron and Levin.

Sudbury's Macauley Carson followed up less than one minute later with his third goal of the season with assists by Levin and Gilhula during the very same power play. The Soo Greyhounds took their place on the scoreboard halfway through the period with a goal by Woodbridge native Jaden Peca, but the Wolves were showing no signs of slowing down.

Shortly after losing a face-off against Greyhounds' Jaromir Pytlik, Levin took control of the puck and with assistance by Carson, scored Sudbury's game-winning goal 14 minutes into the first period. It was at this point in time that the Soo changed Christian Propp out of net in exchange for Ethan Taylor.

The score was 4-1 heading into the second period, with shots on goal 13-8 in favour of Sudbury.

The teams appeared evenly matched in the second period, with both struggling to find the perfect angle for their many shots on net. The stalemate continued until 13:37, when Greyhounds' Peca scored his second goal of the night on a penalty shot against Christian Purboo.

He was followed shortly there after by Soo's Ryan O'Rourke, who scored the team's final goal of the night during a power play at 17:41. He was assisted Greyhounds' Pytlik and Ryan Roth. Shots on goal in the second period were 13-5 in favour of the Soo.

Despite outshooting the Wolves' 10-4 in the third period, the Greyhounds were unable to battle back from Sudbury's early game lead and fell to a 4-3 final on home ice.

The Sudbury Wolves return to the Sudbury Community Arena Oct. 11 to take on Oshawa Generals for the first time in the 2019-2020 regular season. The Pack are currently first in the central division, with five straight wins and two losses.