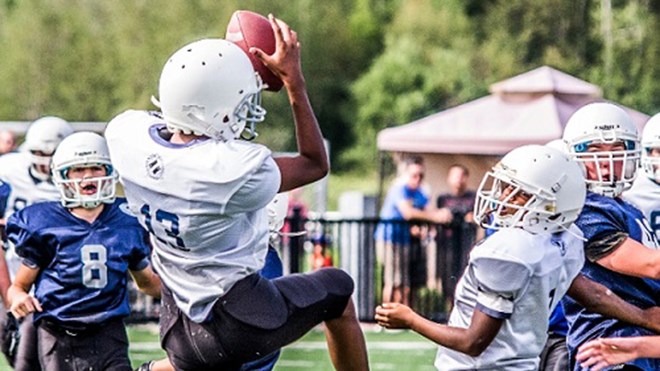 Sure, the turnover on the board of the Joe MacDonald Youth Football League, in recent years, has sapped a great deal of experience around the table, even if many of those who guided the first quarter century remain only a phone call away, more than willing to give of their time and advice, if needed.

But the flipside of this morphing of the administrative landscape of the JMYFL has also opened the door for new ideas, different approaches, perhaps a willingness to look outside of the box for answers.

One of the first local groups to fully incorporate the benefits of on-line registrations, the local minor football league had eschewed any kind of in-person option recently - until this summer.

"We probably only registered five to six players, over the course of four hours, but we talked to a lot of people, a lot of pamphlets were handed out, a lot of questions were asked," noted Joe Mac board member Adam Guilbault of the recent inititiative to spend a Saturday afternoon at Canadian Tire.

"We also reached out for volunteers, and ended up getting three or four. It really served as an information session. From that perspective, it was great. I think it was good to just get our name out there, because we hadn't done an in-person registration in a very, very long time."

More than any other sport, football officials have been forced to tackle the obvious potential correlation between the game that they love and the concerns over the long-term effects of concussions.

Safe to say, football is changing.

On a local level, that starts with the "Micro Macs", the division of five to seven year olds who are introduced to the sport in a non-contact environment. "It's really just about getting kids engaged in football at an earlier age," stated Guilbault, outlining the basics of the grouping that enters year two of existence this coming September.

"We had identified a bit of a gap, especially when you compare us to soccer or baseball or the other options, where they can start much younger. It's just once a week, for two hours, with no practices during the week."

"We do stretching, drills, familiarizing themselves with a football, easy body movements, much like most other sports would do. We move to some very light scrimmages, just a few plays with a couple of balls, just enough to keep them active and try and develop an interest in the sport. We use flags (instead of tackling) for the scrimmage section," added Guilbault.

Within the structure of the JMYFL, players can then advance through from Micro Macs to Mini Macs (controlled contact - ages eight to ten), then on to the Tyke (11-12) or Bantam (13-14) divisions.

If there is one area the new influx of football executives hold near and dear, it's coaching development. "Ed (Prudhomme - JMYFL president) has a great passion for the game," said Guilbault. "He's really working on developing coaches, not just trying to get coaches, but making sure they are properly educated."

And still on the topic of education, the Joe MacDonald Youth Football League is proud to announce that it will again be accepting applications for the JMYFL Scholarship, with a pool of $5000 available to be distributed to successful applicants.

In essence, anyone previously involved with the league, in any capacity whatsoever, is welcomed to put together a 500 word essay outlining their involvement in Joe Mac, and how that involvement affected their lives.

Applicants must be attending a post-secondary institution, as proceeds are to be earmarked towards tuition fees.