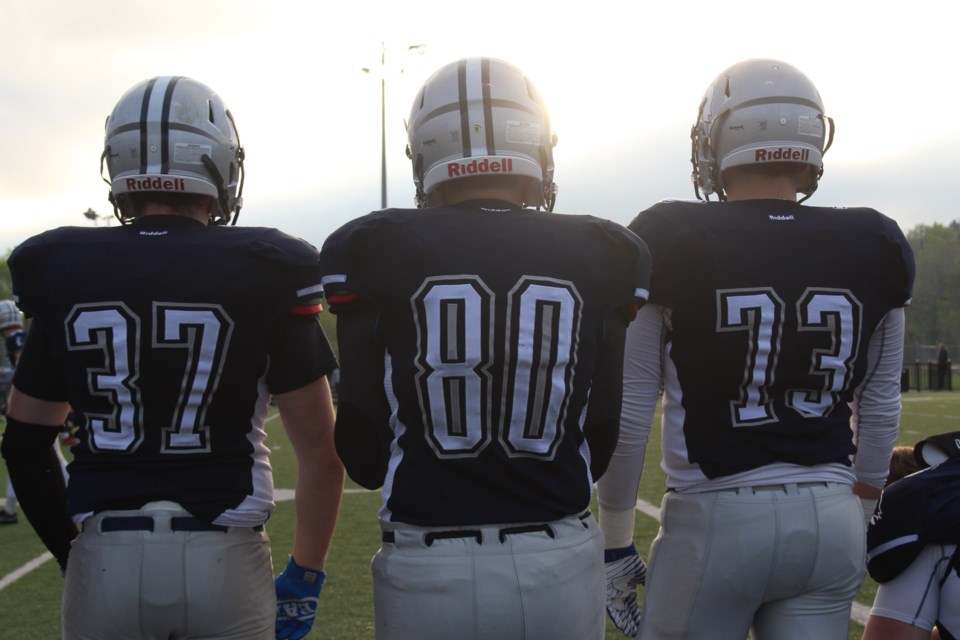 The Sudbury Junior Spartans earned their first ever win on Saturday against the North Bay Bulldogs. (File)

Based on their start, the Sudbury Jr. Spartans appeared set to run and away and hide, in a big way, from the visiting North Bay Bulldogs Saturday at the James Jerome Sports Complex.

But it wasn't until the home team scored twice in a span of 1:13 late in the opening half that coach Reg Bonin and company had the cushion they would need to register their very first victory in the OPFL (Ontario Provincial Football League), downing the Dogs 28-14.

Though they would kick off to begin the contest, the Jr. Spartans needed less than two minutes to secure a lead they would never relinquish. As the opening boot was fumbled and bumbled by the visitors, it was Sudbury linebacker Keegan Esquimaux-Osawamick that would eventually secure the pigskin, leaving his team staring at a first and goal, from the five, just seconds into the outing.

"Whenever I see them fumble the ball, I just run right at the ball, right away and get on the ball," said Esquimaux-Osawamick after the game, finishing the contest with a pair of fumble recoveries.
"That's what the coach tells me to do. When it happens, that's what I do."

Devon Zloty got the Jr. Spartans on the board exactly three plays later, the quarterback calling his own number from one yard out, with Cameron Moxam making good on the convert. Unfortunately, on the other side of the ball, the team was struggling to keep North Bay running back Fisher Bilz in check.

The talented ball carrier eventually burst free for a 41-yard touchdown run, midway through the second quarter, deadlocking the affair at 7-7. The turning point would come a few minutes later.

Pressing for the lead, the Jr. Spartans received their lucky break of the day, when a bad snap somehow bounced directly into the hands of Zloty, rolling outside of the pocket, with the signal caller spotting receiver Blake Ramalho, all alone in the end zone, from 11 yards out.

On their very next possession, Zloty connected with Zach Primeau, who weaved and bobbed his way for a 51 yard pass and run. After ringing his second point after directly off the goal post, Moxam made good on the third, with Sudbury retreating to their locker room with a 20-7 advantage.

The Jr Spartans kept on rolling in the third quarter, when Michael Reich, who split time at QB with Zloty, scrambled in from 24 yards out. When a Bulldogs defender was ejected for throwing a punch, and 35 yards in penalties were tacked on to the ensuing kickoff, Sudbury's Carter Will had no trouble drilling the ball right through the end zone, making up for the missed PAT earlier in the game.

Fraser Bilz closed out the scoring, registering his second major, this time with a two yard run. Overall, the Jr Spartans defense did a nice job of making the necessary adjustments to limit the effectiveness of the North Bay running game.

"We had to start shedding our blocks," said Esquimaux-Osawamick. "Once we started that, we could get to the running back."

With a family sporting history that also includes plenty of experience with lacrosse, the grade ten St. Charles College student is pleased with the cross-over he would make this spring.

"There was lacrosse for me before, when there were enough players to play Rockhounds," said Esquimaux-Osawamick.

"Now that I'm older, we don't have enough players, so I can't really play for them."

He and his teammates will begin a stretch of three straight road games next Saturday, hitting the road to face the Halton Crimson Tide, with their record now sitting at 1-1.