Lancers land at the top at Five Invitational 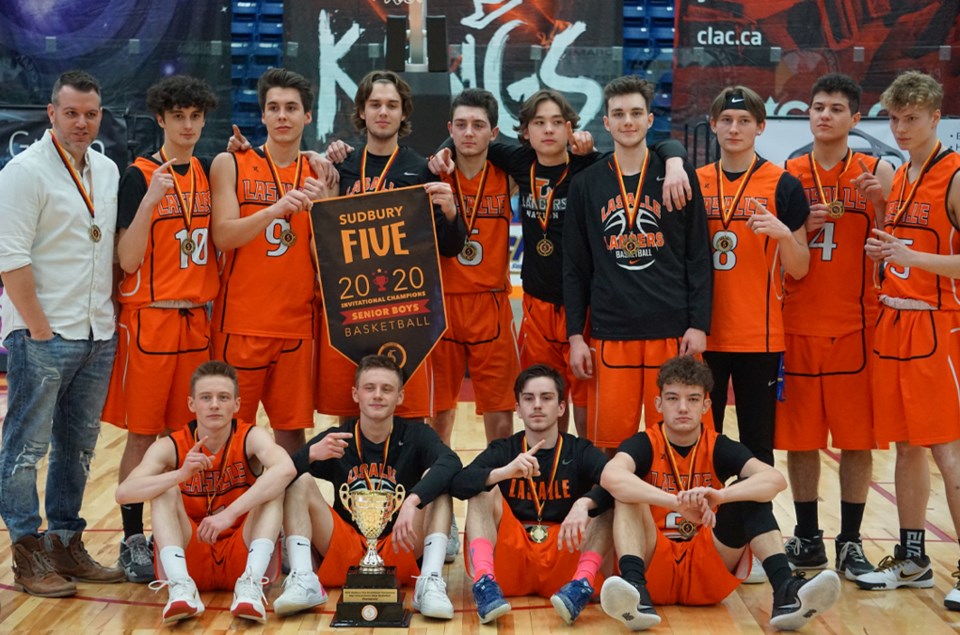 The fun and games are over for the Lasalle Lancers senior boys basketball team.

"This year is straight business," said fifth year Lancer Liam LaPierre, shortly after the team claimed gold at yet another tournament, upending the White Pines Wolverines 56-41 in the final of the inaugural Sudbury Five Invitational High-School Tournament last weekend.

"We take each game like it's our last," said the talented guard, who netted 16 points in the gold medal affair. "This is our last year playing here, and we want to leave on a good note. That's why all of the fellows are here."

There is some background to this story.

Not only is Lasalle graduating an impressive crew at the end of March, a class that includes twin Brennan LaPierre (11 pts in final) and David Middleton (13), but the team is also adament about needing a trip to OFSAA to close out their secondary school careers in style.

After proving themselves as the team to beat in the north one year ago, the Lancers stumbled in the NOSSA semi-finals, upset by the St. Mary's Knights (Sault Ste Marie) despite leading by 20 at the half.

This latest victory marks the third tournament banner of the season for head coach Joel Rehel and company, though many expected his team to battle the O'Gorman Knights (Timmins) in the final, the same match-up that closed out the Laurentian Invitational in November.

White Pines had other plans, downing O'Gorman 40-32 in the semis, while Lasalle dumped the Timmins High Blues 51-34.

"O'Gorman's defense is really tight, they really pack it in," said LaPierre.

"These guys are just big, and we're not a big team. We had to listen to what our coaches are saying, execute, and just play our hearts out. Because they are bigger, we had to keep running. That's been our motto all year, just keep running. I always try and be the first guy up the court, all the time, hitting layups and punching the gaps."

Chase Syrette-Peplow topped the scoring parade for the Wolverines, netting 16 points, whith Logan Whitmell chipping in with 11. The Lo-Ellen Park Knights claimed the consolation crown with a 69-33 win over the Algonquin Barons, with Bobby Sinclair lighting it up for 31 points.

With city finals set for mid-February, the Lasalle lads will squeeze in two more tournament appearances, taking part in the 50th Annual Zenon Ziemba Tournament in Timmins at the end of the month, and travelling to Vaughan/Woodbridge for the Wayne Nugent Classic on the weekend of Feb. 7 - 9.