Michael Stewart holds some special titles — son, husband, father, friend. Those are the titles that matter the most to him. But there’s another title — Canada’s last world champion boxer.
Oct 1, 2012 7:58 PM By: Laurel Myers 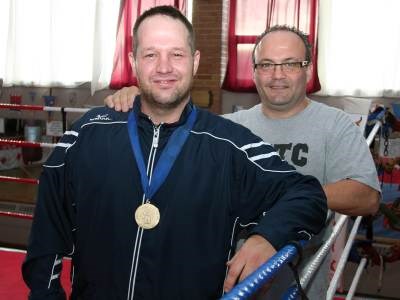 Michael Stewart wears the gold medal he won at the junior world boxing championship in 1992 — the last Canadian to achieve the feat — for a recent visit to the Top Glove Boxing Academy. He is pictured with his coach, Gord Apolloni. Photo by Laurel Myers

Michael Stewart holds some special titles — son, husband, father, friend. Those are the titles that matter the most to him. But there’s another title — Canada’s last world champion boxer. That’s the one that set him on the path to earn those other coveted titles.

Stewart won a gold medal on Oct. 4, 1992. It was Canada’s last gold medal in the junior world championship boxing ring.

As the 20th anniversary of that major milestone in Stewart’s life comes to pass, the glory of winning that medal still beams from his face, the pride he felt as he defeated his opponent still makes him glow. But it’s what came after that medal that really makes him shine.

Stewart, who is now 38, was first introduced to boxing around the age of 11, as a means of dryland training in the summer for his hockey season.

“I wanted to get in better shape for hockey,” he said. “But then I realized I wasn’t tall enough or big enough to go further in hockey, so I fell back on boxing.”

It was around 13 years of age that Stewart decided to make a more serious push into the solo sport. He was under the tutelage of olympic boxing coach Gord Apolloni at the Top Glove Boxing Academy. But boxing didn’t come easily for Stewart.

But his father had instilled some strong values in the young pugilist, that made him push forward.

“Instead of thinking I failed, (my father would) ask me what I could learn from it,” Stewart said. “That concept gave me the desire to keep doing it. That’s the concept and desire that has helped me through my entire life — never to give up.”

After those first 20 losses on his record, Stewart started winning. He put together a long string of victories in the ring and everything started falling into place. After roughly two years as a fighter, Stewart earned his first national title.

That’s the best medal anybody could get, is learning to love yourself, no matter what.

“From there on, I never lost in Canada,” he said.

He was also winning the majority of his fights internationally as part of Canada’s national travelling team. After capturing the national title in 1992, Stewart had earned his ticket to the world stage.

But in truth, Stewart was counting his lucky stars just to be there. He had no expectations of actually winning.

“I went there with the idea of saying I went to the worlds, then I’d quit boxing,” he said. “It would be my last hurrah, more or less.”

But with no expectations and no stress entering the ring, Stewart surprised everybody, himself included.

“Canadians aren’t supposed to win a gold medal at the worlds,” he said. “I was just there to have a good time. I just didn’t care, and that’s probably why I won.”

Winning the world championship catapulted the 18-year-old Stewart onto a pedestal.

“It was an unbelievable, overwhelming experience at such a young age,” he said.

And an experience after which he certainly couldn’t hang up his gloves.

“I’m thinking ‘I don’t really care for the sport anymore because I’ve done it my entire teenage life,’ ... but I’m going to look like a moron if I quit now.”

He attended a tournament in Thailand as a senior at 19 years of age, splitting his two fights. When he returned to Canada, he decided to make a push for the 1994 Commonwealth Games.

But he lost — for the first time in Canada — in the finals of the trials for the Games.

“That was probably the best thing that ever happened to me because now I had my exit planned,” Stewart said. “It was like fate said ‘Here you go,’ and I jumped through that window.

“I’m glad I was able to go out on a high and not stick around and keep looking for that podium again.”

After Stewart left the world of boxing behind him, he had the biggest fight of his life yet to overcome.

“Now I had to figure out who I was without boxing and it was hard,” he said. “I had done it all my teenage life, and now, here I am, Mike Stewart without boxing. You find out who your real friends are.”

He said he went through periods of anxiety and depression after his departure from boxing, but in the end, it was another of the values his father had instilled in him — to always be true to yourself — that led him to the light at the end of the tunnel.

“That’s the best medal anybody could get, is learning to love yourself, no matter what,” he said. “And finding my spirituality, that was the biggest thing. Now I look at the world through spiritual eyes that I didn’t have when I was younger.”

Now, Stewart is a family man. He calls the Valley home with his wife and two young children. In fact, it’s his children that have recently led him back into the boxing ring.

“I’m realizing the importance of life, sports and discipline for my children,” he said. “I’m realizing I don’t have to close the door on boxing, I can have it on my terms now.”

But he’s not trying to win another world championship, he’s “happy just hitting the heavy bag.”

“It’s passion now over performance,” he said. “It’s the way any sport should really be, not all about results.”

As he steps cautiously back into the world of boxing, Stewart said coaching alongside Apolloni at the Top Glove Boxing Academy is a definite possibility. In fact, the former student of the game has already achieved his Level 3 National Coaching Certification. But at this point, he said it’s just an aspiration.

“I’m realizing maybe I can help Gord in a lot of other ways and help the kids achieve amazing results, but through my life story, help them realize there’s sometimes more to sports,” Stewart said. “And making them realize it’s OK if they don’t win. Once a kid realizes that, then he’ll have fun in there and box his best.”

Apolloni said Stewart stepping into coach would be the ultimate gift to young athletes in the Sudbury Area.

“I’m here building character for the kids,” the coach said. “If they become better citizens in our community, I’m happy. If they do something in boxing, that’s just a bonus. It would be phenomenal if Mike was to step into the coaching ring.”

As for being Canada’s last gold medallist? Stewart said it is an “amazing” feeling.

“When I really think about it, it’s unbelievable the feeling, and I probably don’t reflect enough on it. It has helped me so much in life with overcoming any obstacles.”