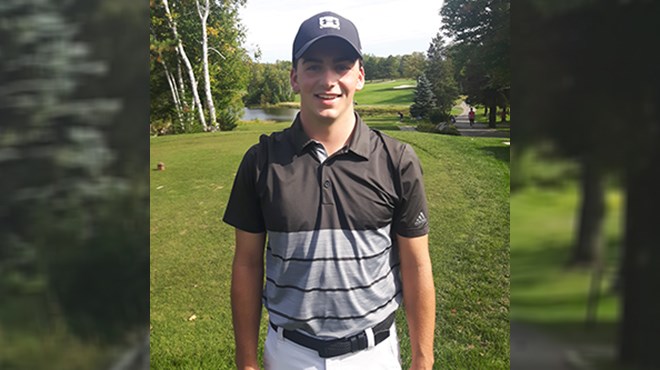 Hayes joins Guy Robineau of Macdonald-Cartier (1982-1984) and Adam Evershed of Lo-Ellen (1994-1997), with the latter holding the record for career high-school city crown victories, with four.

Both Hayes and Taillefer fired even-par rounds of 71, comfortably ahead of Ethan Mulligan (75) and Johnny Svalina (76), as Lo-Ellen golfers swept the top four placements. Joseph Colasimone of St Benedict was the only other golfer to break 80, carding a round of 77.

"This year was a grind," acknowledged Hayes, following his triumph. "I didn't really play my best golf throughout the day. I made a few pretty big mistakes." A birdie on his final hole would force the playoff, though a slice to the left on number one left Hayes with a much tougher pathway to the green than Taillefer, hitting roughly the same distance, but much, much further to the right.

"I was pretty jailed back there, but I knew if I could put myself out to twenty feet or so on the green, I knew I had a shot," said Hayes. "I just tried to make par and hope that he doesn't make that 15-footer that he had."

With both players recording scores of four on the first playoff hole, it was off to try and clear the water on number two. Teeing off first, Taillefer was short of the green, to the right. But with the sloped incline off the green, his ball rolled directly into the rock face, forcing a penalty stroke and drop.

Hayes, who was also right of the green, managed his up and down comfortably, making it three straight titles, all of which have taken place at the Lively Golf Club. "I hit the ball relatively straight and like to pride myself on my short game, and this is a course where you have to keep it in play off the tee and get up and down quite a bit," explained Hayes. "But today, I only hit one fairway, so it definitely wasn't a strength."

Though no official records are kept of the winning team composite scores, it should be noted that the Lo-Ellen total of 293 compares quite favourably to the Lockerby quartet of Nick Quesnel (71), Jason Picco (75), Ward Kyle (77) and Jake Santi (77), who also swept the top four spots in the standings in 2013 with an aggregate score of 300.
Mackenzie Selk of Horizon captured the girls bragging rights with a round of 123, eleven shots better than second-place finisher Vanessa Morrison of Champlain.

The top golfers will be back at it again next Thursday in Lively, site of the NOSSA golf championships, with OFSAA set for October 16th & 17th at both the Kingsville Golf & Country Club (boys) and Pine Knot Golf & Country Club in Dorchester (girls).