Rising star Brett Melanson discusses why this intense procedure was a necessary one
0
Aug 24, 2019 1:00 PM By: Randy Pascal 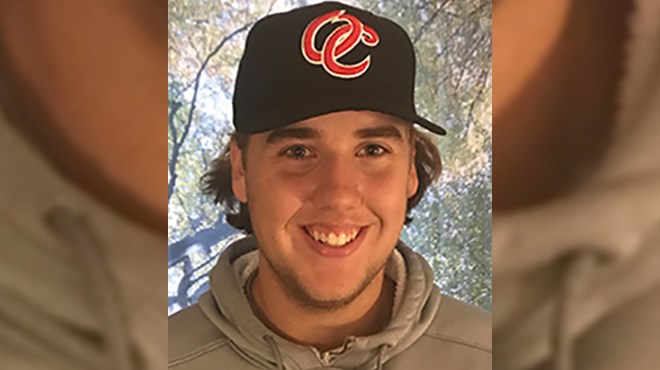 In fact, to the best knowledge of most folks I have crossed paths with at the diamonds this summer, pitcher Brett Melanson might well be the first local product to experience the procedure as it pertains to maintaining a baseball career.

A very familiar face within the Sudbury Minor Baseball Association and the Baseball Academy Voyageurs systems, Melanson had committed to joining the Okanagan College Coyotes last fall, making the move from Northern Ontario to British Columbia.

Unfortunately, things did not quite go as planned for the 6'5" 19-year-old. "I was playing first base and pitching, but my velocity just wasn't there," he said. "It was discouraging at first, being a freshman coming in. I didn't know anybody and wanted to make a good impression."

What Melanson had been thinking was nothing more than a tired arm, treating it with numbing gels and such, was actually a tear in his ulnar collateral ligament (UCL), the very ailment that brought major league pitcher Tommy John to prominence a couple of generations ago.

"It wasn't just an immediate snap of the tendon, it was over time that it happened," said Melanson. "I just knew that something wasn't quite right." UCL reconstruction involves harvesting a tendon from your own body and attaching it to act as a new UCL.

First performed by Dr. Frank Jobe in 1974 on then Los Angeles Dodgers pitcher Tommy John, who would miss the entire 1975 season but would go on to win 20 games or more three times post-surgery, the procedure is now extremely common at both the MLB and minor league levels.

"They cut the tendon out of my forearm, drilled through the elbow and then figure-eighted it through," said Melanson, somewhat matter-of-factly. "Usually they thread it through twice, but my tendon was actually a little bit longer than normal, so they were able to figure eight it through three times, which should make it stronger."

"I knew that I still wanted to play and the doctor (Dr. Jason Smith - who has worked with members of the Toronto Blue Jays staff) told us that it's an 85-per-cent chance that it works. As it was, I had a zero chance, so this is a better option."

Needless to say, baseball plans are now much more in flux. "I'm hoping to get healthy by July or August of next year, and then hopefully sign on with a junior college. It's a little easier with a Juco to get playing time, so I would be treating it more as a rehab."

The starting point toward the long road to recovery began in late June, as Melanson travelled south to go under the knife. "I have a list of week by week things," he said. "I started physio already, but it's just loosening up the muscles and getting the feeling back in the fingers and arm."

"It's pretty slow, right now, but I hope to start throwing again in February." In fact, there are a handful of circled dates on the calendar for the right-handed hurler. "At the 12-week mark, the ligament is supposed to have grafted with the bone, so that's kind of the first big milestone that we are waiting for," noted Melanson. " And I have the count down on my phone to start playing catch on February 23."

It's a process that has been repeated time and time again - just not in Sudbury.